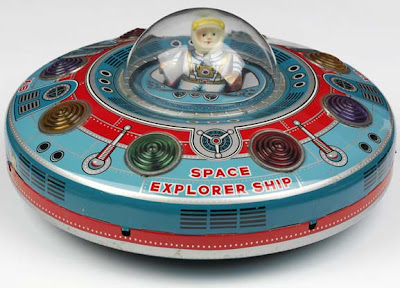 You know how these things happen when you're surfing the 'net. While researching some imagery for a comic strip I'm working on with Ross Dearsley, completely by fortuitous accident I came across information about a touring exhibition organised by the V&A Museum of Childhood named Space Age: Exploration, Design and Popular Culture.

Currently at Truro's Royal Cornwall Museum until 19th April (this museum being what I was actually looking for at the time), this major exhibition explores people’s fascination with space, and how that fascination has influenced popular culture, from literature and comics to film, design and merchandising, including toys.

To help exhibition visitors explore the relationship between reality and fantasy a range of real space objects are displayed together with classic space-inspired designs and childhood objects,hoping to show the reality of how space exploration has developed and how space fantasy and science fiction worlds have been created in people’s imaginations.

The development of the exhibition was assisted by a "Scientist-in-Residence" originally funded by the Particle Physics and Astronomy Research Council (now the Science and Technology Facilities Council). The exhibition also features online learning resources and some venues offer space-related teaching sessions, along with a series of family events (e.g. planetarium shows, popular science talks, rocket making workshops, etc) supported by the Institute of Physics.

• Read more about the Space Age on the V&A web site
Posted by John Freeman at 8:47 pm