Hope Falls Trade in the Pipeline 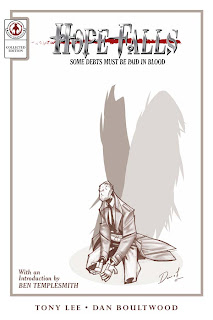 Hope Falls, the five-part miniseries that AAM/Markosia released in 2007/2008 is, hopefully, to be released as a trade paperback, depending on trade orders through comic shops.

The title is an enigma. In many ways, it's known as the 'little train that could', beating all expectations and finishing 2008 as one of the few monthly creator owned books not from Image, Dark Horse or IDW that actually made it to the end of its run, gathering critical acclaim from fans, reviewers and even fellow professionals in the process.

Telling the story of Helen Gane, a small-town waitress who, twenty years after she is murdered and buried in a shallow grave returns to the town, seemingly alive and having not aged a day, Hope Falls weaves a tale of supernatural vengeance and of religious conspiracy.

Helen's reason for returning is simple - she's here to claim back a debt of vengeance on the three men who in their various ways allowed her to die that cold evening two decades ago - and the one man, McClusky, who performed the deed.

And some debts can only be paid in blood.

As the bodycount rises, you discover that not only is Helen a free-falling Angel, plummeting towards Hell, but that another Angel, Michael has arrived in the town of Hope Falls with an intent of stopping her bloodthirsty revenge - for there is a secret tied into her murder that runs back all the way to Jesus Christ, and Heaven won't allow her killer to die just yet.

As Helen learns the true reasons for her murder, Michael learns of an Angelic conspiracy in Heaven and McClusky calls in a Voodoo priest to save his soul. And Hope Falls as a town will never be the same again as every secret hidden for twenty years come together in an explosive conclusion. Will Helen be able to kill all of her personal demons - including a man beloved of God? And what happens when she tries? Will the killing change her - or stop her?

Created by writer Tony Lee (Doctor Who, Spider Man, The Prince Of Baghdad, 2000AD, Midnight Kiss) and artist Dan Boultwood (Dopple Ganger Chronicles, Phonogram: The Singles Club, The Prince Of Baghdad, The Gloom) and with stunning painted covers by Szymon Kudranski (Scatterbrain, Zombie Cop, 30 Days Of Night), Hope Falls is a tale that has been described as The Crow meets Twin Peaks, and writer Tony Lee has on many occasions named it as "The best book I have ever written."

For over a year now, fans of the book have asked Markosia when Hope Falls would be released as a trade, but due to the ever changing economy, the release date has always been tentative. Until now.

"This is a great year for Tony Lee," Harry Markos, publisher of AAM/Markosia explained. "With his announcement as the ongoing writer of Doctor Who for IDW and his upcoming Graphic Novel with us - Harker, Tony is going to exceed all expectations. And with Dan finally gaining credit with his Phonogram work and his stellar art in G.P Taylor's The Doppleganger Chronicles, we decided that no matter what, we had to find a way to release this book."

But the release has not been easy, as Diamond Distribution has altered the way that comics, especially from smaller publishers are submitted.

"We have to sell about 400 copies through Diamond to show that this is a book they want to work with," Harry explained. "Now this might not sound much, but with many people buying the book through places like Amazon, and with retailers only buying smaller publisher titles on demand, there's a very serious possibility that we might only sell below Diamond's cut off point, and we might find that for all this work, the book gets cancelled. So we need as many sales as possible, to ensure that this classic story gets out there.'

And Markosia are eager for all retailers and readers to see a taste of what they could be missing if they let Hope Falls pass them by.

"We're sending a free copy of one of the comics issues to every UK comic shop this month," Harry explained. 'Unfortunately we can't do this through Diamond US as well, but what we can do is provide a taster of the series - anyone who goes to our MyEBook site
Posted by John Freeman at 11:06 am