Tune in for Channel Evil! 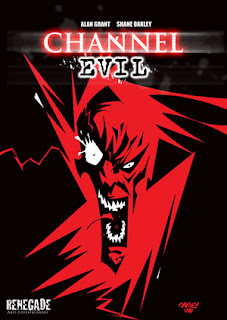 Renegade Arts Entertainment have released more information about Channel Evil, a stunning black and white title from the fevered imaginations of Alan Grant and Shane Oakley, which launches in April.

Co-published with Belfast-based Berserker Comics, publishers of The Dead, the fourt part limited series is decribed as "Alan Grant's imagination unleashed without any corporate compromise."

The story follows Jez Manson, a local TV chat show host ready to exploit everyone in a bid to make the big time. After watching a successful medium channel a benign spirit, Jez invites her on his show, ready to ridicule her for cheep laughs an a few headlines. But Jez is persuaded to try channelling himself. Full of scorn Jez agrees, planning to fake it, but it turns out that Jez is a natural and finds himself channeling Baal, an ancient source of evil.

Trying to laugh the whole thing off, Jez is unaware that he has opened a door for Baal to exploit and return chaos and destruction to the world. Jez finds his dreams full of twisted nightmares that share too many details with the next days news reports.

But the channelling show has made the national news and Jez could be on to the big time. Persuaded to channel him again on live TV, Jez knows deep down he's on the edge of the abyss but the lure of fame and fortune is too strong. What will he unleash this time?

"The idea originally came to me while I was reading a book by a guy who had formed a 'channeling' group to contact the spirits of the dead," says Alan of the story. "I did some research and found that, although it's ignored by the mainstream media, channelling has a huge audience all over the world.

"I wondered what would happen if, instead of channelling one of the boring spirits who advocate peace and love, somebody managed to channel the spirit of some long-forgotten scion of evil.

"I used to own a flotation tan: it was soundproof, and totally dark. Once, when I was in the tank, I was thinking about a Batman story I was working on, which featured a villain known as Cornelius Stirk. Stirk suffered from severe mental illness, which he 'treated' by cutting the still-beating hearts out of his victims and then consuming them. The thought suddenly flashed through my mind: 'This is what I do for a living...and it's evil!'

Immediately, and to my terror, a disembodied voice said clearly: 'You think that is evil? I can show you what evil really is!' Chills ran up and down my spine. I broke out in a cold sweat. I was out of that tank faster than a ferret up a drainpipe!

"When I'd calmed down and thought about it, I realised that - whatever the reality of what had happened - it was a brilliant base on which to build a story. I hope it frightens readers as much as it terrified me." 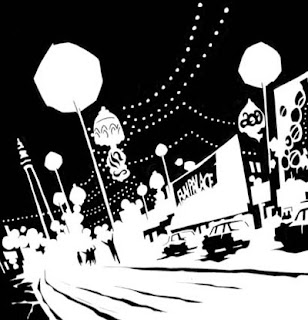 Shane Oakley was always in Alan's mind when writing the story, and his unique style is perfectly suited to the beautiful and terrifying people and events Alan has created.

"Alan has written a dream script for me, and truthfully I'm drawing the best art of my life," says Shane of the project. "I'm pouring my heart and soul into this story and it shows... although working on a story this steeped in horror might well send me over the edge and down into the depths of dark madness."

Shane recently reported he was on the final leg of inking up Channel Evil #1, "and also on my last legs; eternally laid up, tired, undernourished, muttering in tongues, screaming at blank sheets of paper, drooling, hallucinating, giving it up, not giving it up, loving drawing, hating drawing. Am I coming? Am I going? Not sure. But I've put every ounce of what I've got into this book, and I'm hoping it will show." Judge for yourself on his blog, where he's posted several character designs and panels, including this spooky shot of Blackpool sea front.

Channel Evil #1 will be on sale in all dark and scary comic shops across the UK and elsewhere in April.

Currently based in the UK, Renegade has just opened a subsidiary studio in the Canadian Rockies to work more closely with North American talent and to oversee a large feature length animated movie.

The classic horror strand Doug Bradley's Spine Chillers features award winning dramatised movies of works by HP Lovecraft and Edgar Allan Poe, and the audio books are currently available to download from audible.com and will be launched in stores and on Amazon in April.

• Alan Grant has been interviewed about Channel Evil on Horror Comic Book News
Posted by John Freeman at 9:09 am