Tales of the Buddha: A Wasted Gem (Among Others!) 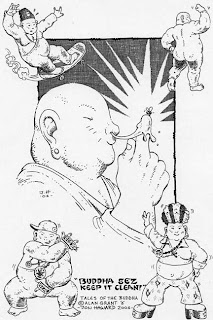 • Classical Comics and Panini artist Jon Haward has a new blog, Haward Art House, where he's posting many a splendid piece of art from his burgeoning and impressive portfolio, including this cartoon featuring his Tales of the Buddha character that features in Alan Grant's very funny, over-18s only Wasted comic, which is about to re-launch.

The team sent downthetubes a copy recently, and Jon and Alan's strip is just one of the highlights as the would-be religious icon tries to find the right religion to hang his hat on.

Wasted Issue 1 comes wrapped in a cover courtesy Frank Quitely: the comic is the brainchild of Jamie Grant (propietor of Hope Street Studios and digi-inker/colourist on All Star Superman) and award-winning writer Alan Grant.

The varied comic strips and artists involved in Wasted include:

"TALES of the BUDDHA"
Drawn by the aformentioned Jon Haward, a long-time Spider-Man artist.

"WACCY BACCY RACES"
Juan McGarcia used to paint Judge Dredd under the pseudonym Xuasus. He is now a top animator, having worked on some of the decade's biggest animated movies.

"WAR on DRUG$"
Gibson Quarter is a young Canadian artist fast making a name for himself. This is inked by Jim Devlin and coloured by Derek Dow.

"SPLIFFY the STONER CHICK"
John Short is one of the UK's best-known and most successful independent comics creators. His Vietnam war comic is a classic of the genre.

"The FUN GUYS - They Crash Parties"
Alan Burrows has drawn Dan Dare, Judge Dredd and many others and the Fun Guys have crashed several other comics and always proved a hit.

"REX the SNIFFER DOG"
By Steve Samson, once the regular Judge Anderson artist and who painted many a stunning Overkill cover for Marvel UK, now working in computer games. Hoodies is by his friend Charles Gillespie, also a one-time Anderson artist, now Creative Director for a computer games company.

"HELL's BELLES"
Largely the brainchild of Dave Alexander, creator of The MacBams, Scotland's answer to the Furry Freak Brothers. Hell's Belles is inked by Colin Barr. Jim Devlin (The Dopranos) inked the War on Drug$ strip and also works as a colourist for DC Comics.

"The DIRTY DOG"
Drawn by Simon Bisley, one of the UK's very top artists - as if folk here needed telling. He painted the first, sell-out Judge Dredd/Batman crossover, and the first ground-breaking LOBO mini-series. Simon now works mainly for Hollywood as a concept artist, but is currently working on a new zombie comic with Alan.

“BLACK CAPE”
Written by Fraser Campbell and drawn by Iain Laurie is Watchmen meets The Boys from the Blackstuff. Beautifully coloured by Derek Dow.

"FAST as F***"
Dave Taylor is a long-time collaborator with Alan Grant on Judge Anderson and Batman: Shadow of the Bat.

It's a great comic if you're a fan of the Furry Freak Brothers, and there's a gloriopus patrick Troughton-inspired Doctor Who parody that has to be seen to be believed!

• More about wasted at: www.wastedcomic.com
Posted by John Freeman at 10:32 pm