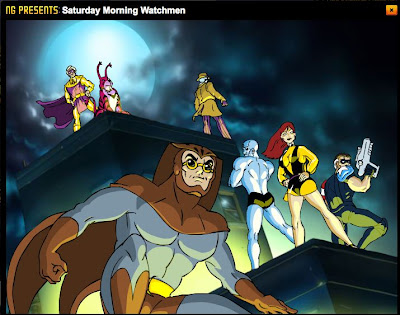 If Alan Moore is annoyed about the new Watchmen film, just wait until he sees this -- although, actually, this hilarious Saturday Morning Watchmen, the creation of British animator Harry Partridge, is the kind of parody he might just like...

Since it was first published on top Flash portal NewGrounds the film has been watched by over 143,00 people. "It was created for as a piece of work to be sold off to a certain company but I wanted to keep the rights to it, and I have done," Harry says, who admits to being "chilled" that over 100,00 people have heard him singing his 'Watchmen theme tune'. "Sometimes you gotta go with your gut.

"This combines two huge passions of mine, one being the comic genius that is Alan Moore and the other being kids programming from the late 1980s which I would say is my biggest animation inspiration.

"Believe it or not, one of the first ever things I ever animated/programmed was a crappy side scrolling Rorschach game where you go around beating up street punks. It was not only a f****** awful game but totally and unironically misinterpreted the source material. I would like to think I've grown somewhat since then but here I am, five years later, doing exactly the same thing! Perhaps just a bit more knowingly..."

Some 500,000 unique visitors visit the Newgrounds site.
Posted by John Freeman at 4:14 pm