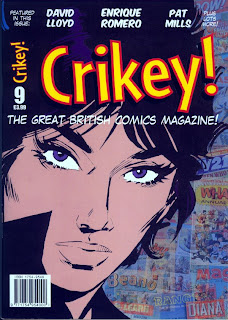 The ninth issue of British comics magazine Crikey! is on sale now in all good comic shops and via its web site (www.crikeyuk.co.uk), featuring interviews with Enrique Romero on his Axa and Modesty Blaise newspaper strips, V for Vendetta and Kickback artist David Lloyd (who recently announced he had contributed to a new French anthology of war stories, Words Of Stars, see his official news page for more information) and a feature by 2000AD co-creator Pat Mills focusing on grils comics creators such as writers Gerry Finley-Day, Jenny McDade, and Misty and Tammy artist John Armstrong.

While there are some gltches in the production of the 52 page black and white 'zine and some 'padding' features that would have been better left on the Internet (such as Derek Wilson's Memory Lane), as cartoonist and British comics expert Lew Stringer notes on his ever-excellent blog, it's a step up from past issues in that the articles feature commentary 'from the source' when it comes to the history of British comics, rather relying on second hand material which Crikey! has been panned for in the past.

"Overall, Crikey! is improving," argues Lew, "but it sometimes depends too much on hazy memories as a substitute for facts." (Read Lew's review of the issue here)