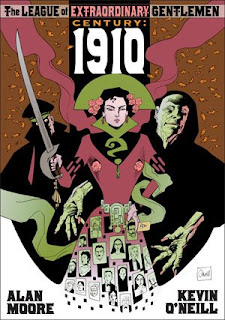 In a new interview for Salon.com that, like other news media features such as this one in The Independent, notes Alan Moore's absence from the credits of the Watchmen movie despite being the comic's co-creator, the Northampton-based writer talks extensively about his numerous projects and approach to his work, addressing, among other things, the infamous length of his scripts.

Moore of course wants nothing to do with the Watchmen film, and is quoted as saying "I will also be spitting venom all over it for months to come", according to a report this week in The Indpendent. "I met Terry Gilliam and he asked me, 'How would you make a film of Watchmen?'. And I said, 'Don't.' I think he came to agree with me that it was a film better unmade."

Revealing the manuscript for his long-awaited novel Jerusalem now runs to some 750,000 words, Moore, currently working on comics such The League of Extraordinary Gentlemen says the length of his scripts seems to be "getting worse" - the actual manuscript for the third volume was something like 250 pages for each 72-page chapter.

He was as taught by people like Steve Moore and other British comic writers that if you fully visualize the scene for the artists, then that would be sufficient to inspire the artist to do a picture that they otherwise might have not intended.

"Even though the readers will never get to read those pages of description that I cram into my stories," he says, "I'd like to think that they will still get the benefit of them because the artist will have translated those pages of often vague and rambling instructions into a concise picture.

"I found that it pays to pay attention to all of the little details," he adds. "In the latest League [of Extraordinary Gentlemen] I've gone through the trouble of rewriting a number of Bertolt Brecht's songs for "The Threepenny Opera." I didn't think it was fair game to take Brecht's songs and reproduce them, because if I'm getting paid to write this thing, I should be writing all of it, so instead I reworked all of the lyrics of the songs throughout the narrative, which is a lot of trouble, but it's also quite a lot of fun and adds to the finished product."

Talking about the original Watchmen comic, Moore says he never thought at first that it might prove so influential. "We thought we were just doing an interesting twist upon the superhero story," he says, "and it was only around about issue three when we suddenly realized that the way that we were telling the story was becoming very interesting and multi-layered with a lot of new things that we had never done before. At that point perhaps we did start to have high hopes for what the book might achieve -- maybe naively we thought, "Once everybody has seen Watchmen, this will open the door for other people to free their imaginations up and do equally progressive works that will take the medium into countless other directions.

"But that isn't the way the culture tends to work..."