This Saturday, for the first time that we can think of, Commando will be taking a table at a comics convention.

While Commando editorial and creators have turned out in force for the three recent Commando museum exhibitions, at the National Army Museum in London and at the University Of Dundee in 2011, and the Gordon Highlanders Museum in Aberdeen in 2012, where signings have taken place, there has never been a formal Commando presence at a convention before.

This will change this Saturday, 30 March 2013, at the inaugural Dundee Comics Expo at the University Of Dundee where DC Thomson are taking tables for Commando and Digital Dandy. These tables will be in the university’s College Hall and the Expo will be open from 11am to 4pm. Entrance to all the Expo events - talks, workshops, screenings as well as the dealers rooms - will be free.

Given the number of Commando reprint books that have been published since the first of the big doorstep reprints, Commando: Dirty Dozen, was published by Carlton in 2005, there is a lot of choice of books for Commando fans to get signed for themselves, or as presents, on the day.

In the meantime not even a convention can stop the Commando publishing schedule of 104 issues a year soldiering on with the latest batch of four titles. 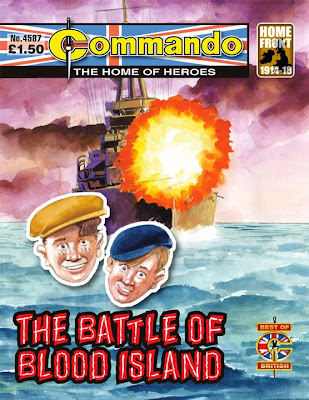 Though it was known as “The Blooded Jewel,” the island of Ula was a peaceful place, its name derived from spectacular sunsets and sunrises not warfare. Sitting in the ocean west of Scotland’s Outer Hebrides, the inhabitants were mainly fisher folks whose only enemies were the elements, wind and sea. That all changed early in the First World War when a force of German raiders swarmed ashore. Caught up in the action were two schoolboys. Upon them depended the outcome of THE BATTLE OF BLOOD ISLAND 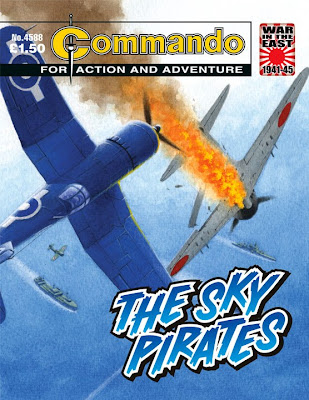 Pilot Officer Mike “Midge” Mercer flew a Vought Corsair fighter for the Fleet Air Arm in the Pacific - fending off hordes of Japanese aircraft as he and his fellow fliers protected the Allied fleet. To begin with, it seemed that the Corsairs - nicknamed Pirates - had the edge. But the Japanese had another card to play which posed a deadly question to the FAA pilots. Just how did you beat an enemy willing to sacrifice their own lives…? 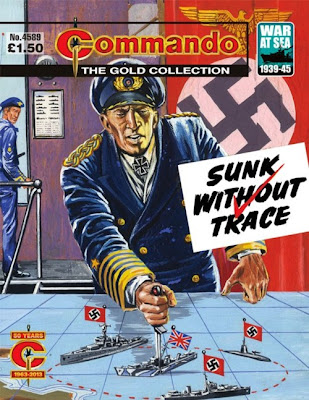 When “The Ship without a name” glided into the Mersey Channel that night, the few watchers were seeing her for the first time, but they never forgot her, for “K-1” was like no other ship ever built. They never saw her again.Her destination - the South Atlantic. Her mission - even the Captain wasn’t sure.But one thing was certain. The Germans were waiting for her. Slowly the jaws of the trap closed. The fantastic story of K-1, the ship that was to change the whole course of the war, had begun…

In his introduction to this reprint, Commando editor Calum Laird says, "Naval stories are always a difficult trick to pull off in Commando. Our compact page size doesn’t exactly lend itself to the depiction of the epic scale and leisurely pace of most sea battles. Which is why subs and MTBs - and, as here, Q-Ships - are our favourites; for the action is close and fast. The team of Blandford, Rigby and James have come up with a story with a hidden mystery, good, effective art, and a menacing cover designed to set up a fast-moving, action-packed story. Classic Commando." 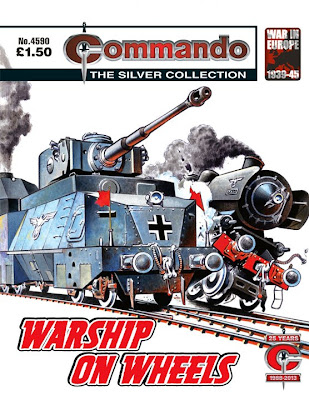 The two young officers had never seen anything like it. A huge German train bristling with guns and covered with armour plating…it was like a warship on wheels. And, as they would discover, when that warship got steam up it was unstoppable - even if another train got in the way!

In his introduction Commando Deputy Editor Scott Montgomery says, "This is a shining example of a Commando caper - a fast-moving yarn that literally starts with a bang (in this case a crashing B-17 bomber) and never lets up during its 63 pages. The credit is due to writer Alan Hebden who created the many memorable characters here. There are escaping British POWs, surrendering Italian soldiers and an unlikely (and unlikeable) Nazi VIP - all brought to life by interior artist Denis McLoughlin. And there’s an excellent, as always, cover from Jeff Bevan. So, all aboard and full steam ahead for a first-class adventure romp!"

*Saving based on discounted Direct Debit price compared with shop price. First quarterly payment discounted by 50% at £12.50 and £25 per quarter thereafter. UK bank accounts only. One year discounted subscription rate of £99.
Posted by Jeremy Briggs at 7:00 am