UniVerse is the imprint set up by the University Of Dundee to publish the work of the students on both the university's MLitt in Comics Studies and the Duncan of Jordanstone College of Art and Design (DJCAD) Animation, Graphic Design and Illustration course's Comic Art and Graphic Novels module. It has also been used to feature the work of the winners and runners up in the annual Dundee Comics Day art competition.

The imprint's main title is Anthology, each issue of which is a full colour, US sized, soft cover, perfect bound book.

Anthology One features the work of the DJCAD students and is a 72 page book with a cover by DJCAD graduate Colin MacNeil.

Anthology Two features the work of the MLitt students and is a 100 page book with a cover by DJCAD lecturer Phillip Vaughan.

Anthology Three again features the work of the DJCAD students and is a 120 page book with a cover by DJCAD guest lecturer Dave Gibbons.

Also featured in Anthology One are the winner and runners-up in the Tartan Bucket comics prize competition from the 2011 Dundee Comics Day and includes the winning strip, Belle's Magic Mobile by Steve English, which was published in The Beano. 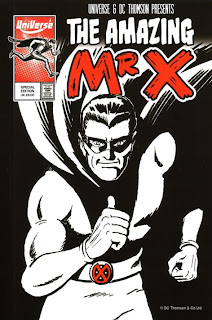 The winner and runners up in the 2012 Dundee Comics Day art competition are featured in a separate publication, The Amazing Mr X. In 1944 The Dandy introduced the first home-grown British superhero and the competition brought the character of Mr X back to life, re-interpreted for the 21st century prior to his appearance in the Digital Dandy strip Retro Active. The 76 page book reprints three of the original 1940s Dandy adventures of Mr X along with the winning strip by Steve Marchant and thirteen other modern takes on the character plus a history and appreciation of the character by University Of Dundee lecturer Dr Chris Murray.

UniVerse titles are now available via mail order from UK On Display:

All four UniVerse titles will be available at the Dundee Comics Expo on Saturday 30 March 2013. Anthology Three will be launched there and will be available via mail order after the Expo.
Posted by Jeremy Briggs at 7:00 am