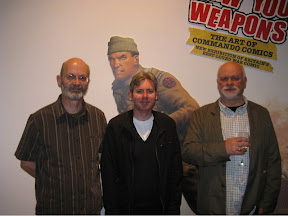 The National Army Museum has just opened its small, but perfectly formed, exhibition based on the art of Commando comic, and Richard Sheaf was there for downthetubes on its opening night...

The official opening night on Thursday (having been open to the public on Thursday morning) saw members of the Commando production team (ex-editor George Low, current editor Calum Laird, deputy editor Scott Montgomery, artist Keith Page and scriptwriter Alan Hebden) take pride of place amongst the great and the good. 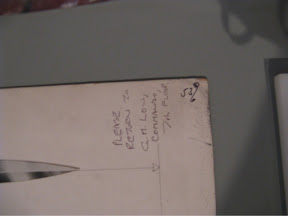 Some of the pieces featured include the cover artwork for Commando Number One (Walk or Die!), the covers of issues number 11, 71 & 98 as well as the original Commando dagger and the illustration made of it that graced so many issues (you can also see the stern warning on the original art that says “Please return to GM Low, Commando, 7th floor”). 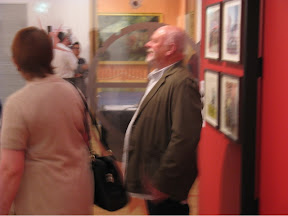 In fact, the only problem with the exhibition is, really, how small it is. 50 covers sounds fantastic (and the art is great) until you remember that there nearly 4,500 issues, meaning that such a small proportion of art is on show here and the museum so large that it’s a shame a bigger space couldn’t have been found to display even more artwork. The exhibition really is just about the covers and the birth of the Commando’s as a unit as there just isn’t space to go into all the other aspects of Commando(‘s). 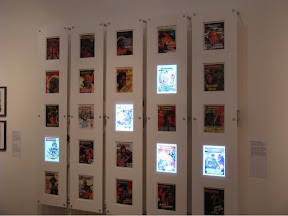 On sale in the shop are Issue 4419 (the tie in issue to the National Army Museum), the large Carlton reprint volumes, the new thin three-story reprints, the Commando calendar, a fridge magnet, postcard, drawing set and (a month ahead of its official publication) George Low’s enormous, superb-looking 175 page, full colour throughout, behind the scenes look at everything Commando: 50 Years a Home for Heroes.

• The exhibition runs for eight months (until 30th April 2012) and is well worth a visit. More info at: http://www.nam.ac.uk/exhibitions/special-displays/draw-your-weapons-art-commando-comics

• More pictures from the opening night on Flickr here


All artwork copyright DC Thomson. Our thanks to the National Army Museum for the invite.
Posted by John Freeman at 7:20 am