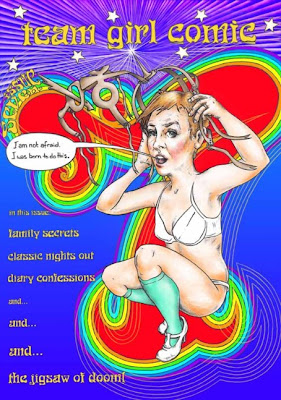 TGC 7 is a 28 page, A5 size, anthology featuring an eclectic mix of short comic strips by female writers and artists from a wide variety of backgrounds and ages, from absolute beginners to professional artists.

The colour cover is by Penny Sharp and the black and white interior features contributions by Gill Hatcher, Evy Craig, Nondo, Jef Sinclair, Anna Clark, Claire Yvette, Honeypears, Cacachute and Claire JC Stewart in which they revisit the girl comics of yore, party like it’s 1949 and bash those bothersome bullies.

Team Girl Comic issues are available to buy from their online shop as well as selected comics shops in Glasgow, Edinburgh and London.