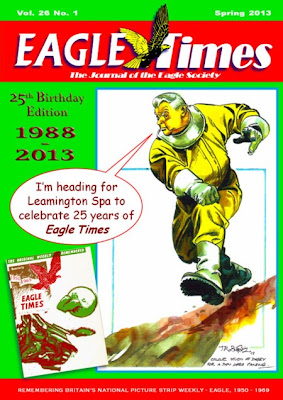 The new issue of Eagle Times, Volume 26 Number 1 - the magazine published by the Eagle Society - features an interview article by downthetubes writer Jeremy Briggs entitled "A Thrill Of A Lifetime In 1957".

"The Thrill Of A Lifetime article in this Eagle Times has perhaps the most unusual back story any comics article that I have ever written,"  Jeremy tells us. "It began late on the Sunday afternoon of the 2012 Hi-Ex comics convention in Inverness when an older gentlemen called Bob Pegg spotted artist Graeme Neil Reid wearing a Dan Dare t-shirt.

“This is the story of a 12-year-old Yorkshire schoolboy who won a competition in Eagle comic in 1957 to fly both him and his father to Africa for an all-expenses paid holiday in what today is Zambia, Zimbabwe and Kenya.

"That would still be a major prize in any comic or magazine today - imagine what it was like over half a century ago for a schoolboy who had never been further from home than Wales, let alone even seen an intercontinental airliner."

Other features in this 25th birthday issue include -

Dan Dare Pilot of the Future on Radio Luxembourg - a review of the radio serial, sponsored by Horlicks, that aired five days a week on 208 Medium Waveband from 1951 - 1956. The article includes a story listing and is accompanied by a short article on the origins of the malted milk product known as Horlicks.

P.C.49 and the Case of the Circular Tins - a further adaptation from one of Alan Stranks' famous radio stories

How I learned to stop worrying and appreciate the genius of John M Burns - a look at the career and varied work of one of the artists who drew Dan Dare for new Eagle in 1990.

When is a Hampson not a Hampson? - on the particular challenge and difficulties of reliably attributing Eagle Dan Dare artwork to its original creator and lead artist, Frank Hampson.

Charles William (Bill) Nuttall - Artist - a former Eagle letterer (Eagle Society member David Gould) provides a biographical review of the early career of lettering artist and illustrator, Bill Nuttall, and his personal recollections of working with Bill at Eagle from the mid-1960s.

Mann of Battle: Part 1 - a look at the World War II strip that ran weekly in Eagle from 1962 - 1964, written by Alfred Carney Allan and drawn initially by Luis Bermejo, then for most of its life by Brian Lewis.

Dan Dare Holiday Special 1990 - the third in a series of articles about Eagle-related holiday specials, this one looking at the only Dan Dare-specific special to be published.

• Membership of the Eagle Society is via Annual Subscription to Eagle Times magazine, which is published four times annually. The subscription rate for 2013 is: UK £27 Overseas £38 (in £s Sterling, please) Postal applications to: Keith Howard 25A Station Road Harrow Middlesex HA1 2UA United Kingdom If you wish to pay by Paypal (to the eagle-times hotmail address below) we request an additional payment of £1.50. Enquiries: eagle-times@hotmail.com.