Photos From The Opening Of The Aberdeen Commando Exhibition

It's not often a comics event is opened with a bagpiper, even in Scotland, so driving into the car park of the Gordon Highlanders Museum in Aberdeen on a slightly overcast summer's morning to the skirl of the pipes set the tone for the day as being something rather special. 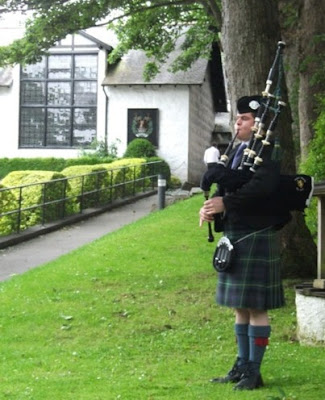 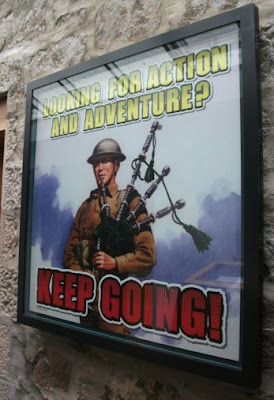 Their exhibition is divided into two main sections with a general selection of covers and interior pages in one area and, because the Gordon Highlanders were part of the Monty's 8th Army in the North African campaign during WWII, a Desert Rats section displaying many covers with a desert theme including the original artwork for Issue 1 Walk or Die which was set during the desert war. 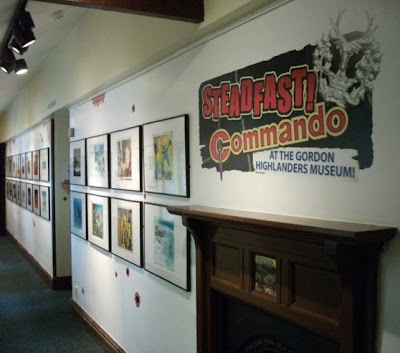 The official opening of the exhibition in the morning was a private event in front of invited guests including the Lord Provost and Her Majesty’s Lord-Lieutenant of Aberdeen George Adam, DC Thomson director Murray Thomson, and many former members of the Gordon Highlanders regiment, and it including short speeches from curator Jesper Ericsson and Commando editor Calum Laird. 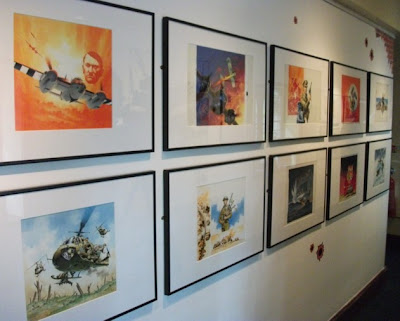 After the official opening and drinks, everyone moved downstairs to the main part of the exhibit where the majority of the covers were displayed along with the original artwork for the Fairbairn-Sykes fighting knife that the title uses as its logo. 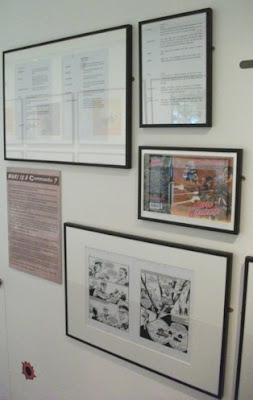 This section also included a selection of internal art pages and descriptions of the history of the titles as well as how any given issue is created from script to the final printing. 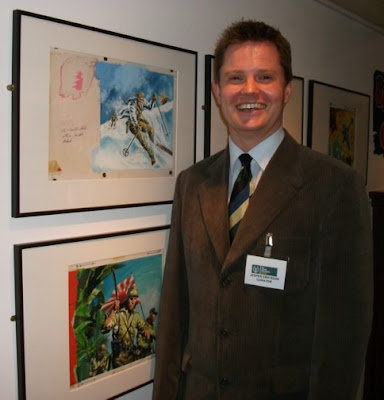 downthetubes interviewed museum curator Jesper Ericsson (above) before the exhibition and on the day his knowledge of Commando, as well as his enthusiasm for the exhibition, shone through in his speeches and introductions for the Commando creators that were present. 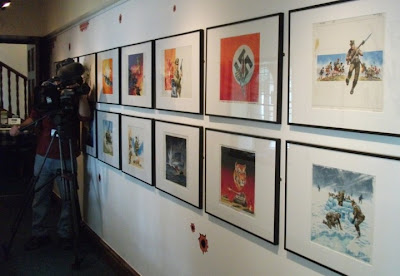 BBC Scotland were on hand to cover the exhibition with their cameraman taking closeup shots of the artwork whilst their journalist recorded an interview for BBC Radio Scotland with Jesper and Calum... 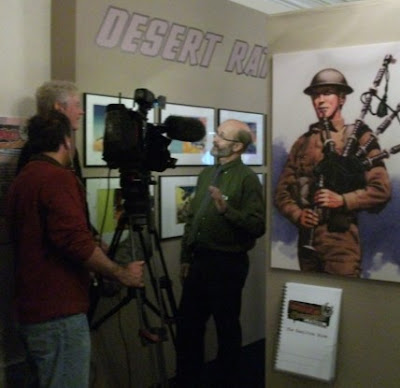 ...before the camera was set up in the second room for the television interviews to take place again with Jesper and Calum Laird (above). These interviews were broadcast as part of that evening's Reporting Scotland BBC1 news broadcast at 1830 and have since been given a permanent link on the BBC News website. 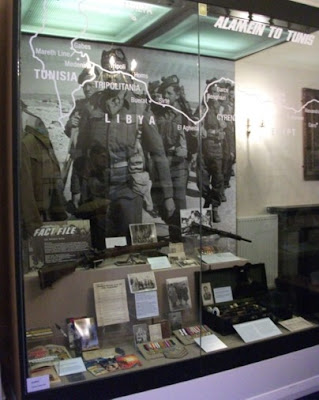 The second room covered the Gordon Highlanders participation in the North African campaign with a selection of photos and other military memorabilia in cases whilst the Commando covers in this room were specifically to do with desert warfare under the heading of 'Desert Rats'. 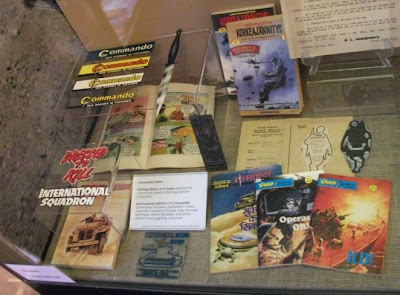 The cases also gave the museum the chance to display some of the Commando office's collection of non-UK editions of the comic included a highly unusual coloured version of the normally black and white comic that was published in India. 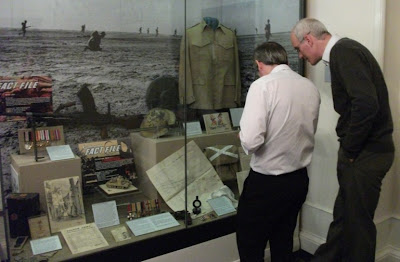 They also gave deputy editor Scott Montgomery (left) and graphic designer Grant Wood (right) a chance to examine the real weapons and military kit that they are so used to featuring in the pages of the comic. 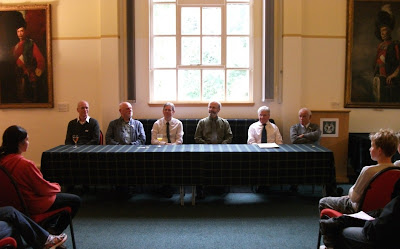 After lunch the Commando team gathered upstairs once again for a talk and a question & answer session that was open to the public. This featured (from left to right) graphic designer Grant Wood, former editor George Low, deputy editor Scott Montgomery, editor Calum Laird, artist Ian Kennedy and artist Gordon Livingstone who all answered questions about their work from local children, long time fans and even the museum volunteers.

Ian Kennedy is Commando's pre-eminent cover artist with over 1200 issues to his credit as well as being quite probably the UK's most experienced comic strip artist still working today with his art first appearing in DC Thomson story papers in the 1950s. Gordon Livingstone began a 38 year association with Commando when he drew issue 4 in 1961 and, as well as painting covers, drew the internal artwork for almost 400 issues before retiring in 1999. Ian rarely speaks at comic events while I have never known Gordon to attend a comics event before, so the museum had quite a coup on their hands when both artists agreed to participate in the Q&A. 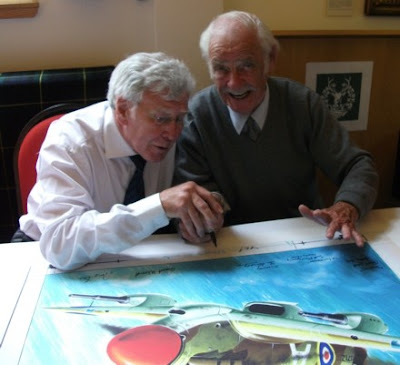 My favourite image of the day was taken at the signing session after the Q&A - two old friends and golfing buddies play up to the camera as Ian Kennedy has to 'force' Gordon Livingstone to sign a large poster of Ian's artwork.

This picture seems to sum up the relaxed and enjoyable nature of the day's events and Jesper Ericsson and his staff and volunteers at the Gordon Highlanders Museum are to be congratulated for both an impressive exhibition and an entertaining comics event.

With thanks to the Commando office for the invitation and to the Gordon Highlanders Museum for their hospitality.

The Steadfast! Commando At The Gordon Highlanders Museum runs from 9 July to 30 November 2012. Entrance to the exhibition is included in the normal museum admission price.

There are more details of the Gordon Highlanders Museum at the museum website and an up-to-date listing of all the museum's events are in the website's events section.

There are more details of Commando at the official Commando comic website.
Posted by Jeremy Briggs at 7:00 am

I was at the talk, and very good it was too. Ian Kennedy was the star of the day, so much so that I'd love to see him do more appearances like this.

The exhibition is well worth seeing, but don't forget to look at the rest of the museum which contains much of interest.