Doctor Who Adventures revamped as series returns to BBC 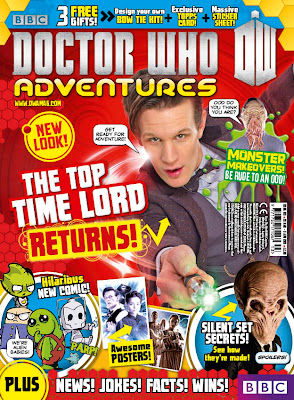 With weekly sales of over 31,000 and ranked Number One in the primary boys magazines market, the title gives young Doctor Who fans a chance to tap into the world of their favourite Time Lord, his best friends and his greatest enemies.

Along with the regular strip drawn by John Ross - albeit in a younger style than before - the new-look Doctor Who Adventures also features a new comic, ‘Alien Babies’, by Jamie Smart, cool monster makes, a collectable Whoniverse guide, behind the scenes secrets and loads more! 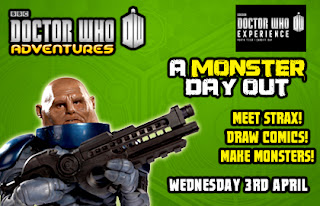 To celebrate, the magazine is inviting kids to their ‘Monster Day Out’ event - the world’s first ever kids only Doctor Who event at the Doctor Who Experience in Cardiff on Wednesday 3rd April. A day packed with monster fun, visitors can meet the show’s widely popular Sontaran, Strax (played as on the show by Dan Starkey), and find out how he feels about being called a potato head during a special Q&A session.*

“We’re really excited to be re-launching Doctor Who Adventures with a dynamic new look and fantastic new content," enthuses the title's editor Natalie Barnes. "This is a brilliant year for the show, and it’s great to be a part of it.

"Our Monster Day Out is the perfect way for us to give something back to our readers – and for them to come face-to-face with one of the Doctor’s most fearsome (and shortest) allies, Commander Strax!”

• Doctor Who Adventures magazine is priced at £2.99 and is available now at all major retailers and independents around the UK. Web: www.dwamag.com

• * Parents will need to register to ask a question during Strax's sesssion. What do you want to know about everybody's favourite Sontaran, Commander Strax? Would you like to know how he became a nurse? Or why he likes being a butler to Madame Vastra? Or how he gets his head so shiny? Then simply email Doctor Who Adventures at hello@dwamag.com and they'll pass your questions on!
Posted by John Freeman at 3:32 pm

Is the main strip still in it? I tried to find a copy in local shops for a look through but none of them stock it now.

Yep, the main strip is still there, but it's in a simpler style.