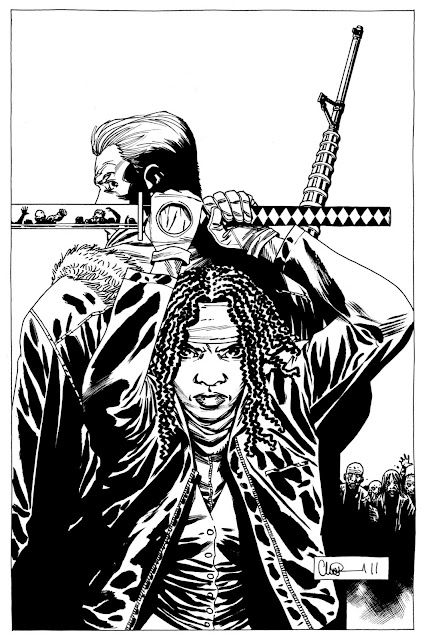 The Lakes International Comic Art Festival has revealed more of the writers and artists who will be taking part in the event later this year.

The festival, which will run from 18-20th October 2013 in Kendal in Cumbria, has a guest list running to more than 50 writers and artists from the United States, Europe, South America and the UK, who work in a wide range of different genres.

The latest group of guests range from Charlie Adlard, the artist on the hugely popular zombie comics The Walking Dead, to the men who created Britain’s most irreverent comic Viz, and American cartoonist Gilbert Shelton.

Charlie Adlard currently works with American writer Robert Kirkman on The Walking Dead, which dominates the list of US best selling graphic novels month in and month out.  It has been turned into a popular TV series, which is currently being broadcast on FX UK, with the third series due to start on Channel 5 around late spring.

Charlie says: “I'm very much looking forward to the event, particularly because the organisers are trying to style it on an Angouleme-style show, which I'm a big fan of.” 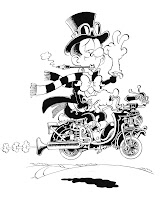 Simon Thorp and Graham Dury are two of the people who created Viz, which introduced characters like Raffles the Gentleman Thug, The Fat Slags, Felix and his Amazing Underpants and Roger Mellie the Man on the Telly to the world.

Viz parodies British comics like The Beano and The Dandy, with crude toilet humour, black comedy and surreal jokes. This will be the first comic event they have attended for more than 25 years (as far as they can remember!)

After a period producing underground comix in the sixties American Gilbert Shelton created The Fabulous Furry Freak Brothers and Fat Freddy’s Cat. Unlike many cults from the sixties which have since faded away, The Freak Brothers are still going from strength to strength and are acquiring new fans all the time. They are published in 15 languages and worldwide sales are now over forty million copies.

Bryan Talbot, who is a patron of the new festival, says: "Gilbert Shelton is a comedy genius and a true original. His strips furnished catchphrases to the entire underground counterculture."

Hannah Berry is one of the talented young artists at the forefront of the new golden age for British comic art.  Her first graphic novel, Britten and Brulightly, was published by Jonathan Cape while she was still studying.  The Daily Telegraph said it was ‘superb’.  The New Statesman described her second graphic novel Adamtine as doing 'horror in the traditional way, while using the quirks of the medium to ratchet up the fear'.

Hannah says: "Just as comics are finally creeping into the public consciousness in the UK, The Lakes International Comic Art Festival takes the stage as the biggest, boldest and brightest celebration of their place in our culture. Long may it continue!"

The prize winning Argentine writer and illustrator Oscar Zarate has created two graphic novels with comedian Alexei Sayle - Geoffrey The Tube Train and The Fat Comedian.  He has also worked with Alan Moore on A Small Killing and produced several graphic novels with Carlos Sampayo. He will be celebrating his new book The Park at the festival as well as running an exclusive masterclass.

Karrie Fransman's autobiographical comic strips were published in The Guardian and her comic serial The Night I Lost My Love ran in The Times. Her graphic novel, The House That Groaned has been praised by film director Nicolas Roeg and was chosen as Graphic Novel of the Month in The Observer.

Robbie Morrison is best known for the Eagle award-winning Nikolai Dante saga which was serialised in 2000AD and, as we reported recently, he has written Drowntown, an epic adventure set in a flooded, futuristic London, which will be published by Jonathan Cape in the summer.  He is also a regular writer on Judge Dredd, and has scripted Batman and Spider-Man.

Spanish cartoonist Pau has won The Oscarcomix children's comics award, the Luis Molina International contests award (Italy) as well as the Haxtur Award for Humor, for his daily editorial cartoon Pau Per Tots.

Ravi Thornton is a multi-award-winning fiction writer whose work often involves a mix of different artistic approaches including graphic novels, sound and theatre.  Her work deals with adult subject matter and ranges from dark and disturbing, through wickedly outlandish, to heartbreakingly insightful. Her graphic novel The Tale of Brin and Brent and Minno Marylebone, published by Jonathan Cape, has been nominated for this year’s Bram Stoker Awards by the Horror Writers of America

Ravi says: "As a cross-media writer, I think very visually. I don't, however, draw. This means people who do draw are one of my most favourite things. At The Lakes International Comic Art Festival I'll be surrounded by them. It doesn't really get any better than that."

Luke Pearson is the writer and artist behind the highly-acclaimed Hilda series of comics published by Nobrow, which are aimed at both children and adults, and the short graphic novel Everything We Miss.

INJ Culbard won the award for Best Graphic Novel or Comic at the 2011 British Fantasy Awards for At the Mountains of Madness, published by SelfMadeHero.  He has also illustrated Deadbeats, which was published by SelfMadeHero late last year, in which a trio of 1920s Chicago jazz musicians find themselves battling with monsters, moonshiners and mobsters.

Inko is a Japanese Manga artist who now lives in the UK.  Her work includes Milk The Cat Comix and MangaQuake. She was also commissioned to create 19 Manga posters at Embankment Station in London as part of Art on the Underground.

Hannah Eaton was shortlisted for the First Graphic Novel competition in 2012 for Naming Monsters, which was published by Myriad Editions, the story of Fran a keen amateur crypto-zoologist – an expert in the study of animals that may not exist.

Kate Evans is an environmental campaigner who marries words and images for political effect.  Her latest book The Food of Love, published by Myriad Editions, is an ironic, self-deprecating view of the impossibility of perfection in an imperfect world.

The Lakes International Comic Art Festival is modelled on the European comic festivals rather than comic conventions that UK audiences are more familiar with.

The aim is create an ‘en fete’ atmosphere, making the whole town part of the festival.  There will be a much bigger emphasis on the range of talks, special live drawing events, workshops, films, exhibitions and a kids’ zone.  Some of the events, including the exhibitions and the kids’ zone will also be free.

There will be a marketplace – The Comics Clock-tower - in Kendal Town Hall, where people will be able to buy comics and where authors and artists will be signing copies of their work. It will be smaller than at most comic conventions and will focus on writers, artists and publishers who are pioneers of a new wave of innovators in the field of comics and graphic storytelling.

Festival Director Julie Tait says: “We’ve now revealed more than half the line up for this year’s festival, so hopefully people have a real sense of the range and quality of what will be on offer later this year.   There’s an exciting mix of some of the big names from the world of comic art over the last few decades, as well as some of the best up-and-coming young writers and artists working in comics.

“We want to create something that is modelled on the European comic art festivals rather than the comic conventions that UK audiences will be more familiar with.

“We hope to take Kendal over for the weekend with comic art and we’ll be putting a lot of effort into individual events to give visitors a special experience.

“So people should expect something a bit different from most other comic events.  We hope it will not only appeal to the fans but also help to bring a new audience to comics, including many local people who may still be wondering what it’s all about!”

• More details about the new event are available at www.comicartfestival.com.  It is also possible to keep up to date with plans for the festival by following @comicartfest on Twitter or by liking the Lakes International Comic Art Festival Facebook page. Tickets will go on sale 7th May 2013.
Posted by John Freeman at 9:00 am