Created by artist Sha Nasir, Laptop Guy is one of the comics titles published by Glasgow's Black Hearted Press.

The first issue was something of an oddity - a US-size, anthology humour comic that played with the somewhat nonsensical idea of a guy with a laptop for a head in a mixture of situations - dating, TV presenting, going to a convention, appearing in Star Trek. It could so easily have been a one-off title consisting of a menagerie of ideas and writers that, like any anthology, had some ideas that worked and some that didn't.

However the one that perhaps worked the best was 'You Can't Sell Out If Nobody's Buying' written by Jack Lothian in which artist Sha's comic alter-ego tries to explain that he is using the character of Laptop Guy as a comment on society. 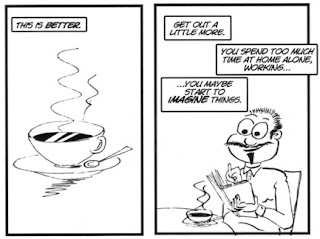 So it is good to see that the second issue of the title takes that basic concept and expands it into a comic length story. With Sha Nasir on the majority of the art and Jack Lothian providing the script, the reader is taken through several days in the life of Sha's alter-ego as he frustratedly tries to illustrate the comic character Marine X (a brutal version of 2000AD's Rogue Trooper and illustrated here by David Braysher). However on arriving at his drawing board one morning he discovers the artwork for Laptop Legion, a Marvel/DC take on Laptop Guy, artwork that he didn't draw but which draws him into a downward spiral that could lead towards madness.

This was not what I was expecting from the title, given the humorous first issue, as it takes it away from the single page gags into something much deeper and more interesting. It's not biographical, or at least I hope for Sha's sake that it isn't, but it does give the impression of a dark take on the 'slice of life' comics that are popular within small press circles.

For those people walking around a mart or convention looking for something out of the ordinary then Laptop Guy 2 is well worth picking up.

There are more details of Laptop Guy on the Black Hearted Press website and it can be purchased from their webstore.

Black Hearted Press will be at the Dundee Comics Expo (Table 18, College Hall) on Saturday 30 March where Sha Nasir will be leading a Comics Workshop at 11:30am (outside the Baxter Suite).

Sha Nasir recently illustrated the factual graphic novel Telling Scotland's Story written by James Crawford for the Scottish Archaeological Research Framework (ScARF) which features a series of stories including the Storegga Tsunami, the Frankenstein Mummies of South Uist, and the 15th century Buannachan Mercenaries. The book was featured on the BBC News site and is available to download free from the Society Of Antiquities Of Scotland website.
Posted by Jeremy Briggs at 1:50 pm