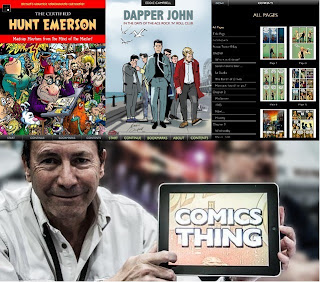 Concluding a month of shows looking at web comics, Alex Fitch talks to two experts in web based technologies about their dissemination methods aimed at bringing comics to tablets and other devices. Russell Willis discusses his Panel Nine range of graphic novels for the iPad which include titles by Eddie Campbell and David Lloyd and are about to be joined by a new digital store front for British book publishers.
Also, in a presentation recorded at Cartoon County in Brighton, Charles Kriel talks about his Indiegogo campaign to fund a new app designed to be the equivalent of iTunes for comics allowing collectors to combine their existing digital comics collections with newly bought titles to fill in the gaps, with questions asked by Alex Fitch, David Lloyd and members of the audience.