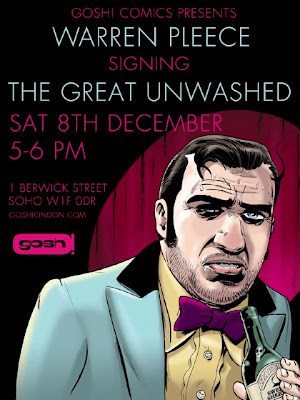 This coming Saturday, the 8th of December, British comics dude Warren Pleece (one half of the Pleece brothers) will be at Gosh! Comics in London, signing copies of his new book The Great Unwashed – a hardcover anthology 25 years in the making.

Featuring works originally seen in their very own comic mag Velocity, Escape, Crisis, Revolver and other anthologies, alongside previously unpublished and new work spanning over twenty years, the Pleece Brothers bring you their own slanted take on popular (and unpopular) culture, in glorious black and white and worn out watercolours.

Warren will also be painting a window that day at Gosh! based on The Great Unwashed.

• Warren Pleece will be at Gosh, 1 Berwick Street Londion, from 5 - 6.00pm on Saturday 8th December. There’s a preview over at Warren’s site and here is the Facebook event page. If you’d like to reserve a copy or want to arrange a signed book/mail order, send an email to info[at]goshlondon.com and they’ll sort one out for you.
Posted by John Freeman at 4:11 pm