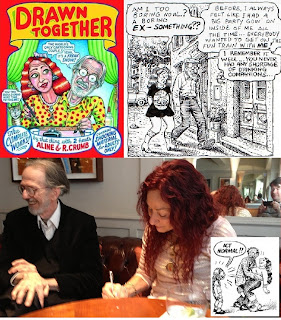 Panel Borders: Drawn Together - 40 years of Aline and Robert Crumb

Starting a month of shows about 'lives on the page', Panel Borders looks at graphic novels which depict the travails of human existence with books that straddle the divide between autobiography and fiction. This week, we're proud to present Alex Fitch's interview with Aline and Robert Crumb about their collection Drawn Together, published by Knockabout, which collects 40 years of their collaborative autobiographical comics, including guest art by their daughter Sophie and other luminaries of the American indie comics scene including Art Spiegelman and Charles Burns.Alex talks to Robert and Aline about the history of the project, how it displays the intersection of her feminism and his sex obsession and aspects of truth and fiction in autobiographical comics.