Full Stage Splash: A Comic Look at the Comic Book 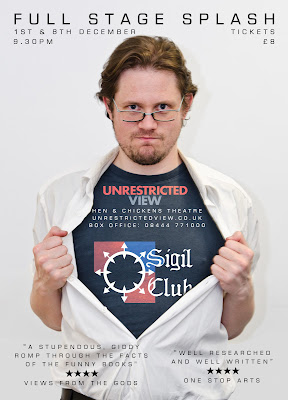 Join the Sigil Club at the Hen & Chickens Theatre in London this weekend, as they dare to fit the entire history of the comic book medium into one hour of comedy, using sketches, puppets, fights and seven-foot long diagrams to educate and entertain.

Full Stage Splash is a fast paced condensation (four actors, 65 roles, one hour!) of a large topic that has been enjoyed by both experts and those with no prior knowledge. It is a humorous take on the historical, social and political changes which affected how those heroes in capes foil the evil villains’ schemes.

After a well received jaunt as part of the Fringe Festival, Full Stage Splash returns to treat those who missed its initial run as it takes over the Hen & Chickens Theatre this coming Saturday night.

Laugh as comic characters are forced to change by the propaganda of the 1940s, the soul searching of the 70s and the bandanas of the 90s!

Weep as a puppet encourages books to be burnt!

Recoil in horror as someone attempts to teach you something!

Described by one reviewer as “A stupendous, giddy romp through the facts of the funny books", the Sigil Club present traditional theatre practices mixed with pop-culture touchstones to excite a wide audience and present new ideas. Their previous plays, including an existential fairy tale, an absurdist comedy, and a live theatre sitcom set in a comic store, have consistently amused audiences, selling out the Hen & Chickens, the Etcetera and the Roundhouse Studio theatres.

Script and direction is by Michael Eckett, who joins the cast which also includes experienced members Daniel Farley, Kate Quinn and Kris Wood. Jackie O’Sullivan co-produces and stage manages with design work by Larissa Kunstel-Tabet and lighting by Julian Adams.