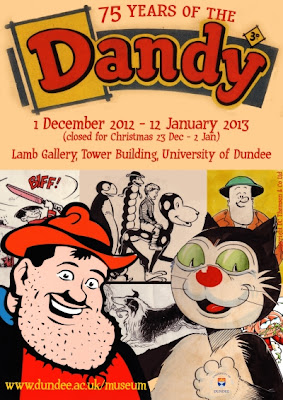 This Saturday coming, 8th December 2012, the University of Dundee University will be holding an opening event for their latest comics exhibition which will celebrate the 75th birthday of DC Thomson's Dandy.

The exhibition will look back over the Dandy’s past, but also towards its future as it moves on-line with the launch of the Digital Dandy. It will feature original artwork from DC Thomson’s collections dating back to the earliest years of the comic, much of which has never been shown in public before. The University previously had a similar launch event for their display of artwork  from The Beano for its 70th anniversary in 2008, a review of which is on downthetubes here.

The launch event for the Dandy exhibition will also give an exclusive behind-the-scenes glimpse at the creation of the new Digital Dandy, with a discussion led by Dr Chris Murray, plus contributions from former Dandy editor Morris Heggie, new Digital Dandy editor Craig Ferguson, Digital Production manager Mark Hunter, writer Dan McGachey, long-time DC Thomson artist David Sutherland, and one of the artists who is very closely involved in the direction of the Digital Dandy, Stephen White (Brassneck and Keyhole Kate). 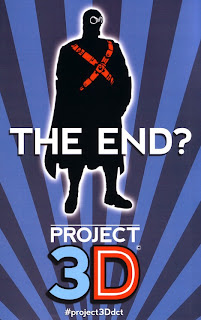 The exhibition and launch have been created as part of an on-going partnership between DC Thomson & Co Ltd, the University of Dundee Museum Services and the newly established Scottish Centre for Comics Studies based at the University. Dr Chris Murray, director of the Centre, said: “We are proud to be able to help The Dandy celebrate its 75th anniversary, which is a remarkable achievement. Of course, the comic is also in a process of transition, as the final print version goes to press and is replaced by a new digital Dandy. This promises to be an exciting and innovative step forward for the comic and its beloved characters.”

The Dandy exhibition launch will begin at 2pm in the Tower Building of the University of Dundee on Saturday 8 December 2012 and admission is free.

The Dandy exhibition will open Monday-Saturday from 10 December 2012 until 7th January 2013 (except when the University is closed for Christmas from 23 December to 2 January) and admission is also free.