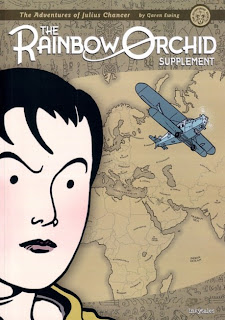 The 46 page, A4 softcover, perfect bound book, with a colour cover and black and white interiors, is designed to sit on the bookshelf alongside the current Egmont published three volume set of The Rainbow Orchid and is made up of bonus material none of which is included in Egmont's recently published The Complete Rainbow Orchid. It is a limited edition and only 250 have been printed. 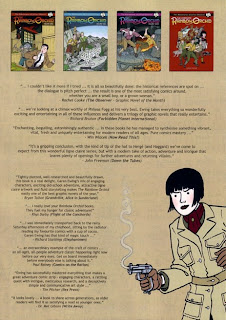 The Supplement includes the covers to every Rainbow Orchid publication from the small press Imagineers to the foreign publications of the books, a long section of annotations to the full published story, a selected bibliography that Garen used as reference material, a selection of initial cover sketches for the Egmont editions, three different interviews with Garen from different sources and, perhaps the most intriguing for hardened Orchid fans, a selection of abandoned ideas for the story.

The Rainbow Orchid Supplement was launched at the Thought Bubble comics convention in November 2012 and is only available directly from Garen Ewing at events or via his webshop. The cost for a signed copy of the Supplement from the website is £7 including UK postage.