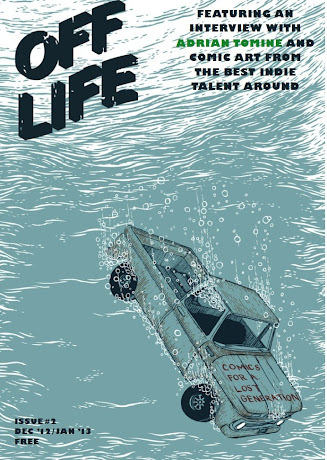 Issue Two of OFF LIFE – the UK’s only free street press comic – is out this week. The magazine was being distributed in Bristol today, in London on Saturday and the digital edition was posted online at OFFLIFE.co.uk this evening.

Featuring an interview with Adrian Tomine and short comics from the likes of Oliver East, Darryl Cunningham, Dan Berry and Joe List, the editorial team think this could be a breakout issue for the comic, which aims to open comics to non-comics readers by distributing free in bars, galleries and coffee houses across Bristol and London.

"The Tomine interview discusses his history of self publishing, his beliefs of where comics fit in modern culture and how they could reach a wider audience," editor Daniel Humphry told downthetubes.


"The comics are a mix of published chaps and super talented unknowns. New advertisers on board include No Brow, comic publisher Ad House and a raft of comic shops.

"We're really happy with how Issue Two came together," Daniel adds. "Thanks to top comic creators putting their time and effort in to some fantastic stories we hope that Issue Two of OFF LIFE continues to bring comics to the masses and helps showcase the potential of this wonderful medium of ours."

• A full list of stockists is also available on the OFF LIFE web site: OFFLIFE.co.uk