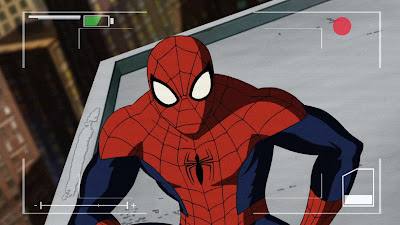 While British comic publishers may be feeling the future is rather bleak, with rumours of The Dandy's impending closure providing a major news story for media outlets as diverse as Radio 4, ITN News and Al Jazera this week, comic characters are enjoying incredible success in other spheres.

A case in point is the new animated series, Marvel’s Ultimate Spider-Man, which has stormed to record ratings on Disney XD UK - and its success is about to usher in even more superhero action on the channel.

Disney XD tell us the premiere episode of Ultimate Spider-Man was the best performing show in its timeslot with boys 8–12 on any kids TV channel in the UK, including those available in twice as many homes.  Over the first six weeks, the series also boosted year on year Disney XD ratings for its timeslot by 77%.

“The success of Ultimate Spider-Man demonstrates the demand for Marvel content from a new generation” comments Boel Ferguson, General Manager, Disney Channels UK & Ireland. “Following the incredible success of Marvel’s Avengers Assemble in cinemas across the UK we wanted to give our viewers a go-to TV destination for more excitement and energy of the latest Marvel series like Ultimate Spider-Man. Beginning 17th August, Marvel Universe will become the TV home for everyone’s favorite Super Heroes.”

Marvel Universe, a dedicated programming block airing every Friday at 3.30pm on Disney XD, will feature some of the most popular Super Heroes in the world - Iron Man, Captain America, Thor, Hulk and Spider-Man.  The Disney XD block will be home to all of Marvel’s action-packed animated series including hit programmes Ultimate Spider-Man, The Avengers: Earth’s Mightiest Heroes and Iron Man: Armored Adventures.

The television success of Marvel’s Super Heroes is being mirrored at retail, with Argos reporting last week that six out of their top 10 toy lines were Spider-Man products and that the web shooting Spider-Man action figure tops retailers’ Christmas recommendation lists.

Ultimate Spider-Man is a series of many firsts, extraordinary given the enduring popularity of the character within the Marvel Universe. In the series storyline, a teenage Peter Parker (voiced by actor Drake Bell) juggles the relatable challenges of high school with the extraordinary challenges of being a Super Hero. Nick Fury (voiced by actor Chi McBride) invites Parker to train with his S.H.I.E.L.D. organization, where Peter's alter-ego, Spider-Man, will join forces with four other teenage Super Heroes - Nova, White Tiger, Power Man and Iron Fist, on the greatest action and adventure ever as they work to become Ultimate Super Heroes.