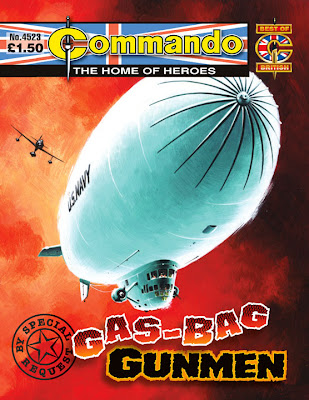 Never had men gone on a secret mission in such a strange craft. Huge, slow, clumsy, she was a perfect target for roving enemy planes.

But she also happened to be the perfect ship for their job. Yes, these guys knew exactly what they were doing!

This Pacific War story -- from the typewriter (remember them?) of veteran Commando writer “Monty” Montague is almost unbelievable. Yet, a combination of careful plotting and cracking art pulls you past any doubts you might have had.

Speaking of art, the black and whites are from Cam Kennedy who was very friendly with Victor De La Fuente whose drawing skills can be seen in Commando No. 4524. Both men can produce magnificent movement in static pictures.

One of Commando’s ‘By Special Request’ issues, reader Stewart Duncan was one of several people who asked to see this one again, principally, he says, because only Ian Kennedy could put a blimp on a Commando cover and not have it look ridiculous. 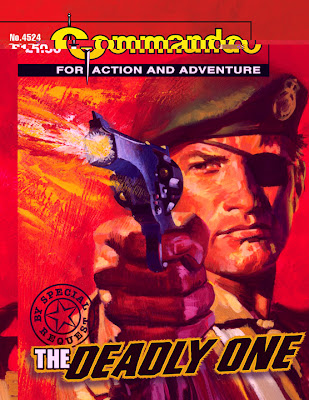 Captain Mike Reilly had lost his left eye in battle so the Top Brass had given him a desk job. And Mike didn’t like that one little bit, because he knew he could still out-shoot, out-march and out-punch almost any soldier living. After all, Nelson only had one eye and one arm and look at the mess he made of England’s enemies!

So Mike set his mind to scheming to get back into the war, little knowing he was letting himself in for the biggest shock of his life...

There was quite a queue to nominate this story for another airing under the ‘By Special Request’ banner, reader Lee Grice being one who suggested it. Looking at that Jordi Penalva cover image, you can see why. It’s so strong what’s inside almost doesn’t matter.

“Only almost, though, and the combination of Hardy’s story and Victor De La Fuente’s super-dynamic art gets you into the action from the first picture. Compare Victor’s black and whites with Cam Kennedy’s in No 4523 — they work the same magic.

As for the title, it works on several levels and in combination with that cover suits the story much better than the working title of Ten Desperate Men. Well done, the 1971 Commando Editor, for picking it. 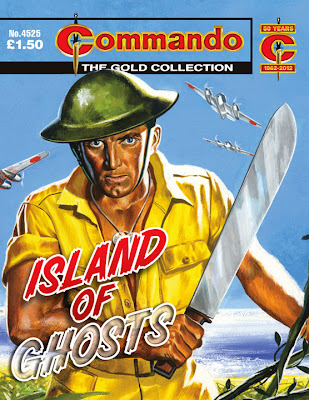 For that was when the ghost walked, and they knew that in the morning another of their men would have vanished without trace...

And in his hiding place a crazy Welshman would clean the blood from his well-used knife...

“The eagle-eyed amongst you will spot that the hero’s blade on the front cover doesn’t quite match the description of it on the back -- this is much bigger than a knife!” notes Commando editor Calum Laird. “But, hey, with a menacing cover image like that, who cares? There is no doubt that Ken Barr’s Commando covers could catch the eye from the other side of the room and draw you in.

“Once you were caught, Bielsa’s stark black and white images underlined the menace in the story, well-crafted as ever by Eric Hebden. In this case he may well have drawn on his experiences as an officer on Gibraltar to give the story its authentic feel.

“And the ghosts? You’ll have to find out about those for yourself.” 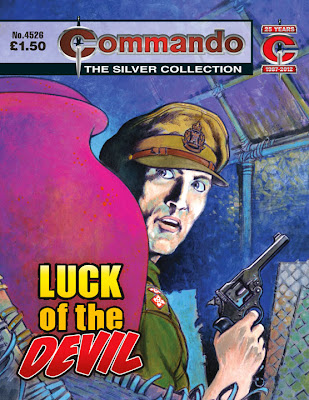 Fleeing into a cave in the grip of mortal fear, John Tilley had the first of a series of amazing escapes from death. From that day he was so lucky it was almost unbelievable.

His men said he had the luck of the Devil. Was that his terrible secret?

“This jungle yarn -- from the pen of veteran Commando scribe Cyril Walker -- has a supernatural flavour,” says Scott Montgomery, Deputy Editor. “The story kicks off with a 1000-year-old curse and then jumps forward in time, focusing on the deadly effect it will have on a group of British soldiers in World War II Burma. Or will it?

“There are great visuals too, of course — courtesy of another couple of Commando veterans, artists Cecil Rigby and Jeff Bevan. A quarter of a century on, Luck Of The Devil remains a terror-tinged tale that never lets up.”