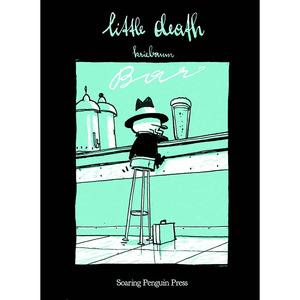 In case you haven't heard, Soaring Penguin Press is holding a launch party for its latest book, Little Death, the creation of Thomas Kriebaum.

Originally published in Germany and Austria as kleiner Tod, the book has sold well and is described as “a small man in a black suit who has a distinct dissatisfaction for his vocation."

"The image of 'Little Death' is not absolutely new," says Kriebaum in an interview for Spiele Magazine earlier this year. "A couple of years ago I had a contribution with the title Death in Venice for a Slovenian comics magazine. In the story, 'Little Death' is spending his well-deserved vacation in Venice with shorts, a colourful shirt, a cap and all the madness of Venice in the high season, including tourist masses, inflated prices… and there, he has to deal with more worldly problems.

"At the same time, I came across Arthur Miller’s Death of a Salesman. Because I really enjoyed the 'Little Death' character, I transformed my Death in Venice to a Salesman who dealt with death. Very classic as the typical sales representative from an old American movie, he wore a suit and a hat, and carried a briefcase – and was just as popular and successful.

"Now and them I would draw other stories for a magazine or an anthology, or just for my own amusement. Over the years, I produced so many short stories of 'Little Death' (and there will be more in the future) that I had a real collection of them in my drawer. After my first comic book Life, the publisher watned to continue my work, so I suggested a book of 'Little Death'."

The launch takes place on 21st August at 7.00pm at the Battersea Mess and Music Hall (http://www.batterseamessandmusichall.com).

"We have the books, we have the book plates, signed and numbered by Thomas Kriebaum and limited to only 150," says publisher John Anderson.


- Further information about the book launch here: www.facebook.com/events/400779749983774/
- For further details about the book, go to www.littledeathcomic.com