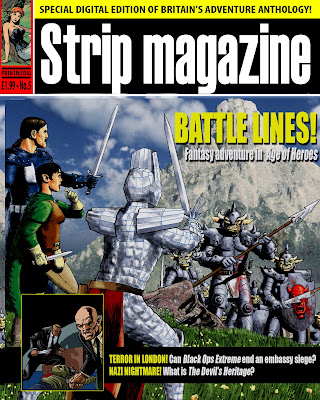 The digital edition of STRIP Magazine #5, published digitally by ROK Comics on behalf of Print Media, is now on sale from iTunes for £1.99.

This digital edition of the anthology comic features many of the stories that appear in the print edition but some bonus items along the way, just for iPad readers – and at a special price.

- In Black Ops Extreme (by John Freeman and PJ Holden) the the do-or-die military team try to end an embassy siege in London - and confront a ghost from their past!

- The battle for the future of Earth hits the streets of Houston in Warpaint (by Phil Hester and John McCrea)!

- Reluctant hero Constant finds himself in a desperate race to find The Devil's Heritage (by Jerome Felix and Paul Gastine)!

All this plus some exclusive, digital-only trailers for the new-look STRIP: The Adventure Comic Magazine, set to debut later in 2012 in print and for digital devices; full information on the new look we're planning in 'Comic Cuts'; an interview with comic creator Nick Abadzis; the crazy antics of Cosmic Patrol and Bogey-Man Bob; and a special taster of two comics from digital partner, ROK Comics - Team M.OB.I.L.E. and Houdini!

The print edition of STRIP Magazine Issue 5 includes additional strip material not included in this digital edition, but these will all appear in STRIP Magazine Digital Issue 6 out at the end of August. This special digital-only Issue 6 will wrap some storylines that complete in the print 'bumper' version of Issue 5 (still stuck in delivery hell), as well as again trailing the new look STRIP.

The digital issues of STRIP - for iPad only at present - are now available for just £1.99 each.

Good stuff . And another end of august? Great.