Is it all over for The Dandy?

National newspaper The Guardian has reported that DC Thomson may be considering an end to The Dandy, with its sales slipping away despite numerous attempts to save the title in the face of changing tastes, distribution issues and competition from other media.

Fans have already rallied online with a #SavetheDandy campaign on Twitter, urging comic readers to get out and buy the comic. Commenting on its 75-plus year history, comic creator Neill Cameron, a contributor to The Phoenix, urged support and others quickly took up the cause.

A full official statement on the title's future has yet to be made - the editors of both The Beano and The Dandy are on holiday this week - but The Guardian notes the 75-year old comic's circulation has declined as children have grown out of the habit of reading weekly comics, with their free time given over instead to watching TV and more recently playing video games and surfing the internet.

Various artists on the title have begun to comment on the possible demise of the title, including Jamie Smart, who was a key part of the title's most recent revamp in 2010. That saw the arrival of a Harry Hill comic strip (drawn by Nigel Parkinson) and many changes to the look of the title in an impressive effort to both appeal to potential new readers and continue to appeal to existing ones. 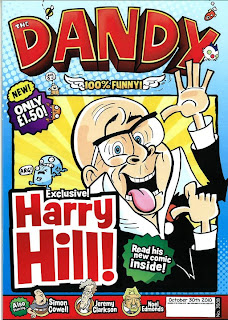 The relaunch was backed by a decision to print around a quarter of a million copies of the revamp issue, in-store dump bins to highlight it on shelves among the many other more magazine-oriented childrens' titles and other promotion. Sadly, for whatever reason, actual sales of the title were not reflected by these herculean efforts to breathe new life into the title, and slowly dropped back to the declining figures The Dandy was selling at pre-revamp.

The Dandy has outlasted DC Thomson's other titles such as the Beezer and the Topper by 20 years or more, but circulation decline has continued and by the second half of 2011, circulation had dipped below 8,000, according to the most recent official figures.

Despite the potentially bad news, creators who have worked on the title are adamant the brave decision to transform its look in 2010 was something worth trying in the face of declining sales.

"When The Dandy relaunched a couple of years ago, what it did was phenomenal," notes Jamie Smart. "It had previously tried to go a bit more ‘magaziney’, but now it was turning full circle and defiantly stating no, we are a comic, and we are proud of it.

"The last two years of The Dandy have been an absolute triumph for British comics," he argues, "a confident love of sillyness, slapstick and mess. A great wave of ridiculous characters and stories, an unashamed love of all things absurd.

"It also ushered in a host of new artists, fresh talent, being given their first break in the industry. It wanted to try new ideas, new things, giving us free reign to be as silly as we wanted. It was a playground.

"... To see this news emerging, it’s pretty crushing," he adds, urging comic fans to get out and buy the comic. "It’s no exaggeration to say The Dandy is a British institution, and a pillar for British comics. It has been essential to our culture. As the artists involved towards what may be its final days, we are incredibly proud and honoured to work on such a comic, to be given the opportunity to entertain children.

"We believe we have delivered real quality comics, and that The Dandy has been a shining light in what is a shrinking industry."

The Dandy first went on sale in 1937 costing 2p, with a free whistle and now costs £1.99. If it was priced on a par with a bar of chocolate - a common frame of price comparison used by publishers in the past - then a cover price of 65 or 70p might help, but quite aside from editorial, print and paper costs, distributors today tend to demand and favour higher-priced titles on their shelves in order to maximise their profits, rather than support a pricing change which might benefit potential consumers and publishers.


A spokeswoman for DC Thomson told The Guardian that the closure of the print title was being considered as part of a review of the company's magazine business, but indicated that characters such as Desperate Dan would continue to exist online. (This is something former editor Morris Heggie seemed to be hinting at in comments he made in an interview about the future of comics earlier this month).

The Guardian also notes characters such as Desperate Dan could also continue in print by switching to DC Thomson's sister title The Beano, although if cancellation is on the cards in the very near future, we'd argue that an old-style comics merger is unlikely given that title's recent revamp.

"We are carrying out a review of our magazines business to meet the challenges of the rapidly changing publishing industry," the spokeswoman told the Guardian.

"There are many challenges within the industry at present, but we're excited that the digital revolution has also given us an opportunity to innovate and develop. We're confident that future generations will continue to enjoy our much-loved products and characters."

• The Cartoon Museum in London is preparing an exhibition celebrating The Dandy's 75th anniversary, which will open in October.

I do hope they decide to merge The Dandy with The Beano rather than just finish it altogether. And if it does go, maybe they will continue with the annuals (it could become a yearly treat like The Broons/ Our Wullie.)

A merger isn't likely IF (and at the moment, let's assume it's "IF" not "WHEN") a closure is destined to happen in the next few weeks. The Beano has just seen a major revamp. I suspect it's more likely we'll see The Dandy's principal characters move online, promoted via The Dandy app and various official web sites, such as their Facebook page.

It's now confirmed. The Dandy will cease publication in December.