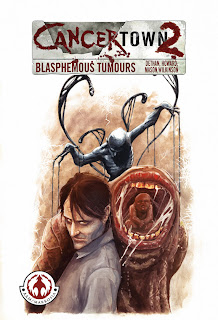 We can no longer protect you. Cancertown 2: Blasphemous Tumours is coming... and the creative tram is now accepting pre-orders for the book before its official launch in November.

If you order now, you're also in with a chance to win a framed piece of art by the book's artist, Graeme Howard.
Set six months after the events of the indie comics horror hit Cancertown: An Inconvenient Tooth, Vince Morley is a dangerously sick man. Bugf**k is in a psychiatric hospital, sticky fingers picking through the darkest corners of the mind that brought Cancertown into existence. The crossing points between Morley’s two realities are wearing thin and all the rules are changing.

Within Cancertown, something new has appeared – a creature of horrific violence and limitless rage. The foundations are shaking and the old powers are falling, one by one. Papercut, deadliest of the Cancertown players, seeks out Morley to claim the favour he owes her – a favour that could cost him more than just his life.
Written by Cy Dethan, with pencils by Graeme Howard, colour by Peter Mason and lettered by Nic Wilkinson, Cancertown 2: Blasphemous Tumours is set for a November 2012 from Markosia - so get one ordered now before it gets drowned in the latest Marvel/DC crossover melee and never makes it to your local comic shop. 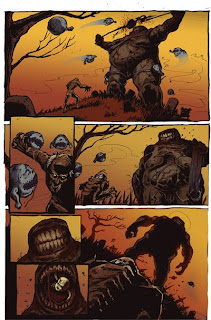 In May 2009, an unknown team unleashed their first creator-owned work, Cancertown, on an unsuspecting world. As the scrappy indie outsider flew off the stands at Bristol Con at its astounding launch weekend, it earned high praise from the likes of comic book legend Bryan Talbot and others, including myself.
Suitably encouraged, Cy and company are now back with a second helping of Cancertown and if the art they've shown off on their blog and via MyEBook is anything to go by, this sequel is even more disturbing but enthralling as the first, and it's likely to be a smash hit when it launches at the Thought Bubble Sequential Arts Festival in Leeds in November.
The Cancer Cell has grown and mutated to include the talents of Graeme (Dick Turpin and the Crimson Plague) Howard on pencils and amazing new discovery Peter Mason on colours. 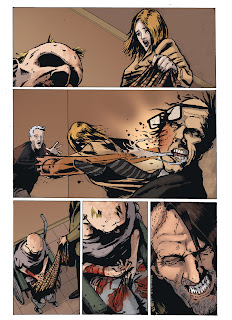 The book is the focus of a Pre-order Offer prior to its Thought Bubble debut:

Everybody who pre-orders will be entered into a draw to win a framed original sketch of the Cancertown characters by Graeme Howard.

Every pre-order will also have a DVD containing the following:
Postage: £2.50 UK, £4.00 Rest of World. Payment must be received for pre-orders by 1st November 2012 to qualify for pre-order price, competition and extras DVD. Normal cover price of the book is £16.99 (180 pages, colour). You can pay by cheque or Paypal.
• Please visit http://theraggedman.blogspot.co.uk/p/special-offers-and-pre-orders.html or email cy@cydethan.com for more details, to place your order or for payment information.
• Read a free 11-page preview: http://www.myebook.com/index.php?option=ebook&id=128757
Posted by John Freeman at 8:00 pm