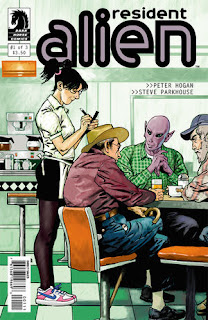 In this week's episode of Panel Borders on Resonance 104.4 FM (London), the last of our series of shows about comic book creators who collaborate together, Alex Fitch talks to Steve Parkhouse and Peter Hogan about their new comic, Resident Alien, initially serialised in Dark Horse Presents and now continuing as a comic book miniseries.


The comic tells the story of an alien who has crash-landed in rural American and found a job as a small town doctor, now turned detective when a body is found in mysterious circumstances. Alex talks to Peter and Steve about working together, producing comics for both the UK and US markets and their previous experiences on revered British anthology titles Crisis and Doctor Who Monthly. (Recorded in front of an audience at Kapow!, London, Spring 2012) 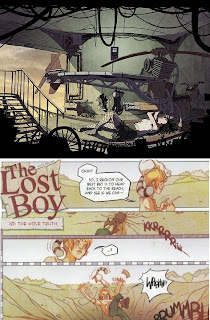 In the latest episode of the Caption Podcast, and the first to have been recorded at Caption small press festival 2011: Alex Fitch hosts a discussion between cartoonists Kate Brown (The Lost Boy) and Paul Duffield (FreakAngels) about their comics and working practices. Kate and Paul are both alumni of the Manga Shakespeare line published by Self Made Hero and bring subtle, illustrative lines to their work, with washes of colour and and obvious interest in Manga.
The two creators discuss sharing a studio, bouncing ideas off each other and working on children’s comics such as The DFC and The Phoenix as well as their first graphic novels.