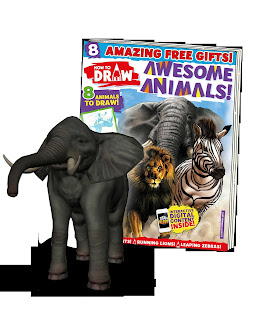 How To Draw... Awesome Animalsmagazine explains to kids clearly and concisely how to have fun learning to draw awesome animals such as lions, zebras and elephants and then turn those skills into their very own comic-strip story.

All readers need to do is download the Free Titan Alive app, powered by Aurasma, from the iTunes apps store and point their smart devices at the magazine to view detailed video demonstrations by artists who clearly show readers how to draw awesome animals.

As well as interactive features inside How To Draw... Awesome Animals magazine, the front cover comes to life with a 3D animated model of a charging, trumpeting elephant.

Titan Alive, which the company plan to use on other titles, allows your smart phone or tablet to recognise images in your favorite comic, then changes your view of the real-world with videos, music and 3D animations called "Auras".

"We're really excited about this unprecedented AR Magazine in the youth market and looking at more ways to involve AR content through our kids magazines portfolio," commneted Michelle Fairlamb, Titan's Group Advertising Manager. "This offers our readers additional content, a more enriching experience and even further ways to interact and engage with their favourite magazines."

Ben Wheeler, Creative Director at Aurasma said, "Through the Titan Alive app, Aurasma and Titan have brought art and technology together to show a whole new way of seeing and interacting with the physical world. We hope this brilliantly practical use of augmented reality will enlighten, educate and entertain readers!"

Aurasma is the world's leading augmented reality platform, developed by and part of software company Autonomy – an HP Company. Available as a free app for iPhones, iPads and high-powered Android devices or as a free kernel for developers, Aurasma uses advanced image and pattern recognition to blend the real-world with rich interactive content such as videos and animations called "Auras".

Auras can be created for printed images, product packaging, clothing, physical places and users can even use the app to create and share their own. Since its launch in June 2011, Aurasma has had more than four million downloads and over 6,000 partners in markets including retail, fashion, sport, automotive, education, advertising and publishing are using the free technology in their campaigns, on their products or embedding the technology in their own applications.

• How To Draw #1 ... Awesome Animals magazine is available in all good magazine retailers from 26th July.