In Review: XIII - The Trial 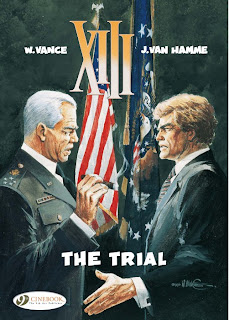 For the last two years of these reviews I have listed the current pseudonyms that XIII the man was using over the course of the many books in this series - a list that has grown rather long. However over the last couple of books writer Jean Van Hamme and artist William Vance have revealed the man and his family background so that readers have a much better understanding of who he is and what had happened to him prior to his amnesia shown in the first book. XIII - The Trial, while furthering the main thrust of the XIII story, uses much of that back story as the basis for its plot.

The XIII saga began with the assassination of American President William Sheridan and, over the course of many books, readers discovered that his brother, Wally, was the instigator of that assassination and much of what happened afterwards which finally resulted in Wally becoming the new president of the United States Of America. At his retirement ceremony, Chairman of the US Joint Chiefs of Staff General Ben Carrington, whose daughter Kim had been used as part of the greater assassination plot, uses his access to President Sheridan to kidnap him and hold him hostage in a disused underground missile silo. With the American public unaware of the kidnapping, and the US military unable to recapture the silo without the President being killed, Carrington advises that XIII and Major Jones must recapture the dangerous assassin known as The Mongoose and bring him to the silo. With both the President and the Mongoose under his control, General Carrington intends to put President Sheridan on trial for his crimes and broadcast the proceedings for all the nation to see. 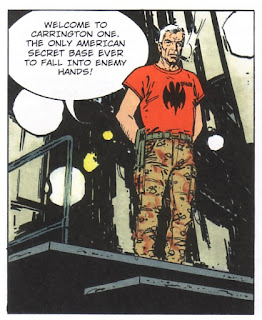 The Trial sounds like the rather credulity-stretching plots of one of those cheap TV movies that clutter the evening schedules of the less well known satellite channels. However Van Hamme is such a good writer that he can take the so-so bare bones of the story and weave his XIII tapestry around it resulting in a book that harks back to much of what has gone before and reuses many characters familiar to long time readers, yet remains surprisingly accessible to new readers due to the format of the trial explaining the whole assassination plot. The book is effectively split into three - the initial kidnapping and official reaction to it, XIII and Jones capturing The Mongoose, and finally the trial in the underground silo, and with this episodic timeline it is perhaps not as satisfying as other titles in the series but the ending does establish the characters for the books to come. 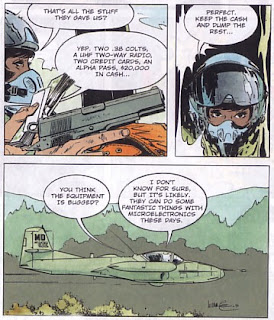 Vance's artwork, while dealing with a lot of closed rooms and talking heads during the first and last sections of the story, gets to shine during the middle as XIII and Jones plot to retrieve The Mongoose from his luxurious Caribbean hideaway. While the Pentagon building, Caribbean island and underground silo locales leave Vance little chance for his rapidly-becoming-a-XIII-trademark of a fight in the rain, Jones adds yet another accurately illustrated military jet to the rather long list of Air Force and Marine Corps aircraft that this US Army officer is able to fly (and in this case crash... and walk away from... in the rain).

Twelve books into the series, and with such an overarching plotline, it can be difficult to recommend a jumping on point for this series other than the first book. XIII - The Trial, despite being deeply embedded within the main XIII assassination storyline, is just such a jumping on point as it provides a taster of what has gone before along with the promise of more intrigue to come.

There are more details of the English language XIII books on Cinebook's website.

There are more details of the original French XIII albums on the official XIII website (in French).

You can read an interview with Cinebook publisher Olivier Cadic and XIII translator Jerome Saincantin on downthetubes at XIII Questions About XIII.