In Review: The Scorpion - In The Name Of The Father 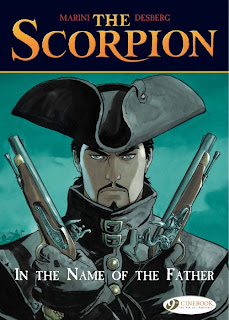 Then it is time to start reading The Scorpion books written by Stephen Desberg, illustrated by Enrico Marini and published in English for the first time by Cinebook. With the conclusion to the Cross of St Peter story in the previous title, In The Name Of The Father begins a new storyline for the 18th century rogue.

Returning to Rome with his friends, the trustworthy Hussar and the beautiful Mejai, the Scorpion finds that the city is a place of fear and death, cowering under the power of Pope Trebaldi. Their only chance to destroy the corrupt Pope’s rule is to investigate the life of the Scorpion’s mother who was burnt at the stake for 'seducing' a senior member of the Catholic church many years before. With Trebaldi's dangerous warrior-monks replacing the Swiss Guards, the trio must investigate the records of the church from decades before whilst hiding their own identities for their own protection. 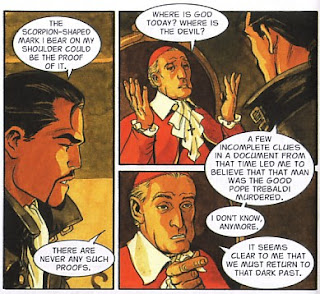 Adventurer, womaniser, swordsman, thief, swindler, arrogantly self assured of his own survival, with blood ties to one of the most important people on the planet, and a woman whom he both hates and desires, and who appears to reciprocate those same feelings back at him - the Scorpion could quite easily be Nikolai Dante. With this book starting a new storyline of the character trying to discover more about his mother, why she was burnt at the stake, and just who exactly his father is or was, writer Stephen Dresberg gives the reader a lot of exposition and introduces a lot of new characters. While this is detrimental to the normally fast paced action of a Scorpion book, it is readily forgivable as it sets the scene for the next round of the battle of wits between Trebaldi and the Scorpion due to play out over the next few books. 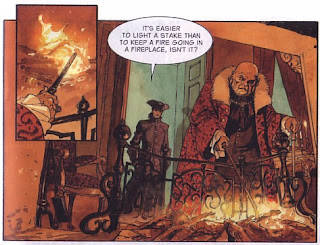 The relative peacefulness of the storyline and the amount of skulking around gives artist Enrico Marini plenty of opportunity for moody, shadowy scenes. For me Marini's skillful artwork, with its dramatic panel designs and beautiful watercolour backgrounds, has always helped The Scorpion titles to stand out amongst the more adult Cinebook titles, including the better known and well regarded XIII and Largo Winch. His subtle background colours do much to enhance the pages as opposed to the typically harsher colours of the other titles. This book is no different and the art is as much of a joy to look at as in the preceding Scorpion titles.

The Scorpion - In The Name Of The Father begins a new chapter in the adventures of the title character with a thoughtful , if slightly more subdued, story told, as ever, which beautiful artwork.

There are more details of The Scorpion books on the Cinebook website.

There are more details of the French Scorpion books on the Le Scorpion website (in French).

The next Scorpion book, The Angel's Shadow, is due to be published by Cinebook in 2013.