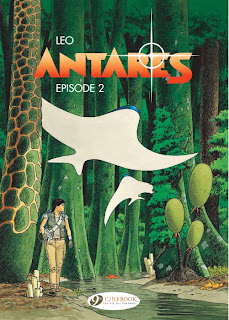 Brazilian artist and writer Leo (Luiz Eduardo de Oliveira) continues his Worlds of Aldebaran saga with Antares Episode 2, the second part of the third series of his incredibly alien tales of 22nd century interplanetary settlers and the beasts and plants they find on the worlds that they settle.

Having survived her experiences on Aldebaran 4 and Betelgeuse 6, Kim Keller is more than experienced enough to be the obvious candidate to help the team that is being sent to Antares, but with her young and not entirely human daughter to protect, Kim has to be effectively blackmailed into the job. On the colony ship with her daughter Lynn and friends Mark Sorenson and Mai Lan, Kim soon discovers that many of the colonists are from a religious sect with some uncomfortable beliefs as she has a run in with both them and the ship's Subcommander. 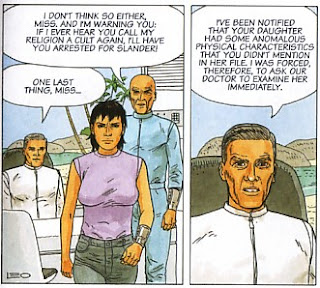 However the difficulties on the ship fade into the background when they arrive at Antares and, during the disembarkation, one of the shuttles develops a fault and crashes in a forest far from the designated landing site. Kim and a small team mount a rescue whilst, back at the main landing site, all is not as safe as it might seem.

Leo never gives his main characters an easy time of it on his alien worlds and Antares is proving to be no different. The previous two series, on Aldebaran and Betelgeuse, gave them military dictatorships to deal with in addition to the difficulties posed by the planets, and the first section of this book gives the impression that this time the problem will be religious fanaticism.

However once on the planet other problems soon pile one on top of the other as the arguments between the humans are overtaken by the need to rescue the people from the crashed shuttle while the planet throws up all manner of weird and wonderful plants and creatures. Indeed what to the characters is one very minor incident on the very last page of the book shows the reader something totally unlike anything seen in the preceding eleven books and gives the impression that the story has so far barely scraped the surface of what is living on this planet.

Leo's artistic imagination for alien flora and fauna is always a highlight of the Worlds Of Aldebaran books and Antares is no different with a mixture of flying, amphibious, carnivorous and just plain odd looking beasts that stalk, observe, frighten and attack the colonists once on the planet. While his designs for the future technology can feel somewhat basic, his alien beasts always make up for it.

Antares - Episode 2 builds on the background of the initial episode as well as reintroducing the sort of story that made both the Aldebaran and Betelgeuse series so intriguing and riveting to read and so, while Episode 2 cannot be read as a standalone book, it suggests that this Antares sequence of books will join its predecessors as being an impressive series.

There are more details of Antares (and Aldebaran and Betelgeuse) on the Cinebook website.

The downthetubes review of Antares - Episode 1 is here.

There are more details of all Leo's books on The Worlds Of Aldebaran website (in French).