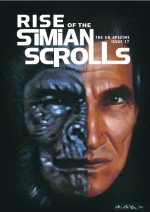 A new issue of the popular UK Planet of the Apes fanzine, Simian Scrolls, along with some of the previous issues, is available to download free online.

Edited by John Roche, the summer 2012 issue (issue 17) is available here along with issues one to six.

Eagle-eyed apes fans may have seen a brief clip from the original Charlton Heston apes movie as part of the London Olympics opening ceremony on Friday evening.

There have been numerous comic strip adaptations of the Apes saga over the years. A tie-in to the 2001 Tim Burton-directed apes movie was published in the UK by Titan and edited by dtb's John Freeman.
Posted by Ian Wheeler at 5:01 pm

Email ThisBlogThis!Share to TwitterShare to FacebookShare to Pinterest
Labels: Fanzines, Planet of the Apes