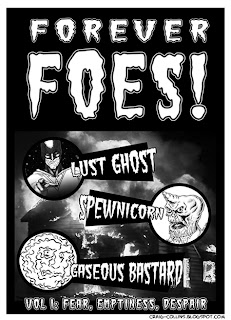 Everyone seems to be getting in on the children's book market these
days... Madonna, Katie Price, Idi Amin and many more. And, just as they
stretched their respective talents beyond pop music, brutal repression
and other accomplishments Glasgow-based comic creator Craig Collins has done the same and launched his own line of children's novels.
Proudly brought to you by Harry Potter publishers Bloomsbury, Forever Foes is available in all good bookshops and follows the adventures of a series of different villainous adventurers
"...as they run the gamut of negative human experience, smashing and
fucking everything in their path!".
Each character has been brought to life by a different
talented artist from the Scottish comics underground as follows:
Lust Ghost - by Spanky; Spewnicorn - by Robert Thomson;
Gaseous Bastard - by Rob Miller;
Meat Nun - by Paul McCann; Plague Chef - by James Corcoran ; The Wicker Gran - by Alex Ronald; Prison Troll - by Curt Sibling;  Gory Tory - by Dave Alexander and the perhaps dubiously named
Space Racist - by Iain Laurie.
Craig is also one of the contributors to the latest issue of SCREAM Magazine,  which features one of his comic strips, drawn by Curt Sibling.
• More about Forever Foes on Craig's blog here