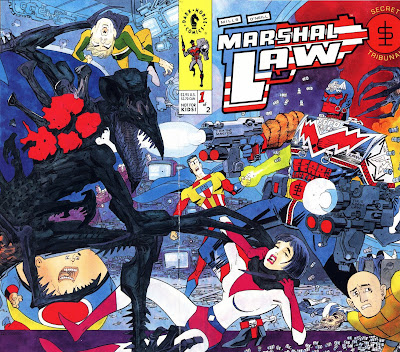 The Marshal Law: Deluxe Edition, collecting all the character’s solo stories, has been confirmed for release next March from US publisher DC Comics.

Marshal Law was one of the first major creator-owned characters for a major American publisher, first published under Marvel's Epic Comics banner in 1987, with other appearances courtesy of publishers such as Dark Horse and Image.

The series is a satire on the superhero genre, characterised by its extreme graphic violence and nudity, and Mills' skewering of superhero conventions and US government policy and society.

Speaking on Facebook, Pat said at the time that the American publisher of Superman and Batman would be reprinting the existing material featuring their acclaimed law-enforcing anti hero, in formats and on a schedule to be determined.

"It's great to see Law being published by DC," Pat said. "It means our character is finally going to be seen by an entirely new generation of readers. A character who was the original and remains the strongest of all the critiques of super heroes.

"I think this is l because I really mean it - that is to say, I share Law's perspective and his angry desire to find a hero in a world that is supposedly littered with them. And of course that's doubly true for Kevin; so we encourage each other in our various visual and story excesses.

"DC's enthusiasm for such a hard core and uncompromising character who really lifts the lid on the world of costumed heroes is an encouraging sign of the changing publishing times we live in."

So, if the collection sells well, will we see a Superman or Batman crossover with Mills and Neill's savage law enforcer?

"Whether Law ever gets a chance to later "interact" with the heroes of the DC Universe remains to be seen, but I can always dream."

Other early 2013 DC Comics collections with work from British publishers include Grant Morrison's Batman Incorporated in January. The full advance list is here on the DC Comics web site
Posted by John Freeman at 11:06 am