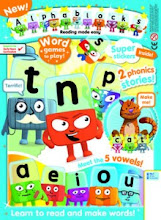 Immediate Media, the company now publishing many former BBC Magazines along with new titles such as Rastamouse, has just launched another pre-school title. Alphablocks magazine aims to help the growing number of parents who want to support their child's reading and writing in a fun and creative way before they start school.

A survey of 1,000 UK parents, conducted on behalf of the magazine via Immediate Media's Parenting websites, found that 88 per cent of parents think it's important to help their child learn to read and write before they start school. This is even though just 43 per cent of the adults surveyed were helped to read and write by their own parents before starting school.

Aimed at pre-schoolers aged 3-5 years - and based on the popular CBeebies TV programme of the same name - Alphablocks magazine is the only title that supports phonics, a technique that helps children learn to read using letters and sounds. The title provides parents with an engaging and affordable resource that they can enjoy with their children and use to support their learning from an early age.

Phonics is now high on the government's education agenda, with all children to be given a phonics-based progress check in year one*.This survey's findings suggest that this may have influenced the current generation of parents who are now more concerned with giving their pre-school children a good grounding in literacy.

The survey also found that adults who had learned to read and write with their own parents had fond memories of the experience and wanted to instil the same positive attitude towards books and reading with their own children. They also wanted home learning to be fun and playful, rather than structured.

, editor "As we start the summer holidays, a lot of parents with young children will be thinking about giving their children a head-start before they start their first term at school," explains editor Stephanie Cooper. "Learning to read and write should be fun and a chance for parent and child to bond, share a sense of achievement and create happy memories of learning to read. Alphablocks magazine gives them the chance to embark on a learning journey together, through reading and making words all with the aim of giving children a strong, confident start with literacy."

- Alphablocks magazine is priced at £2.50 and is available now at all major retailers and independents around the UK.