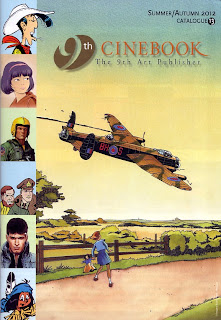 It has been a while since we reviewed any Cinebook titles here on downthetubes so this week we will be putting that right with a selection of reviews of various Cinebook releases from the last few months.

Before that, and with a eye to the wave of big budget films based on US comics hitting our cinema screens over the summer, it is worth remembering that Steven Spielberg's disappointing The Adventures of Tintin is not the only recent Franco-Belgian bandes dessinee series to hit the big screen.

Indeed the live-action The Extraodinary Adventures of Adele Blanc-Sec, directed by Luc Besson, was everything that the Tintin film should have been but, while it is readily available on DVD in the UK, that fact that it is subtitled will put off all but the most determined fans. The Adele Blanc-Sec books are published in English (or perhaps that should be American) by Fantagraphics but there are also three bandes dessinee series that are published in English by Cinebook that have recently have had live-action outings.

The Largo Winch series, written by Jean Van Hamme and illustrated by Philippe Francq, is the closest thing Cinebook has to James Bond and the French film industry thought so too as they took the character to the big screen in 2008 in Largo Winch: Deadly Revenge with Tomer Sisley as Largo and British actress Kristin Scott Thomas as the female lead. Moving the W Organisation from New York to the perhaps more picturesque skyscrapers of Hong Kong, the films tweaked Largo's origin story and built it into the feature film. The film is in a mixture of languages depending on the country any particular scene is set in although the main two languages are English and French with the British DVD having English subtitles for those sections that need them.

"Nerio Winch, self-made tycoon and head of the mysterious corporate empire known only as W Group, has been brutally murdered. Due to an absence of siblings Nerio's legacy is in danger of falling into the wrong hands. Without a suitable replacement the W Group will be destroyed. But Nerio had a dark past and a deadly secret: an adopted son by the name of Largo Winch. Adventurer, assassin, killer, maverick and international playboy, Largo Winch is the last of a dying breed. Now head of a global corporation he must fight for what's rightfully his and avenge his father's death. Bullets will fly and heads will roll in this highly explosive, spectacular thriller that gives Bourne and Bond a run for their money. Based upon the highly successful comic book series and novels by Philippe Francq and Jean Van Hamme, Largo Winch takes action cinema to another level. ...Largo Winch: Deadly Revenge."


Deadly Revenge was successful enough for a sequel to follow in 2011. The Burma Conspiracy again featured Sisley Tomer this time with Sharon Stone as his leading lady in a story that was even more like a Bond film than the original and, with Ms Stone rather than the Paris based Scott Thomas in it, the collection of languages featured were more weighted toward English.

"When the occupants of a Burmese village are massacred, the incident is linked to a billionaire playboy and international man of action and his deceased father's multi-national corporation. Determined to clear his name and hunt down the real culprits, he journeys into the hazardous terrain of the Burmese jungle in search of the truth, armed and loaded. Sharon Stone (Basic Instinct, Casino) and Tomer Sisley (Labyrinth, The Nativity Story) star in the explosive, high-octane thriller The Burma Conspiracy."


From the deadly serious Largo Winch to the much more humorous Lucky Luke and while there have been various television and cinema versions of Morris and Goscinny's cowboy character, the latest is the 2009 version simply entitled Lucky Luke with The Artist's Jean Dujardin as the title character (dealing with a horse rather than a dog) and the film also features Dujardin's wife, Alexandra Lamy, as Belle, Luke's romantic interest. With a multitude of Lucky Luke book characters featured, the film is completely in French as so is fully subtitled on its British DVD.

"Jean Dujardin (Oscar® and BAFTA® winning star of The Artist) stars as Lucky Luke, a crack-shot gunslinger with a lightning fast draw and a conscience to boot. After witnessing the savage murder of his parents at the hands of the vicious Cheater Gang, Luke dedicates his life to bringing the very wildest in the west to justice, that is with a non-lethal twist. Years later, when the President of the United States assigns Luke the task of cleansing the streets of his hometown, the crime-ridden cesspool known as Daisy Town, Luke is stirred back into action."


Finally there is the 2008 television mini-series XIII: The Conspiracy based on the early XIII albums written, like Largo Winch, by Jean Van Hamme and this time illustrated by William Vance. The XIII books share more than a numerical title with the 24 television series so it is perhaps unsurprising that US television would attempt a version of XIII while 24 was still popular. As this was made for America (unlike both the previous and more recent live-action XIII TV series) and so is in English with Steven Dorff as XIII, Val Kilmer as The Mongoose and Lucinda Davis as Jones, while the story diverges from the books by adding a new female character, Sam, played by Casino Royale's Caterina Murino.

"The first female US President Sally Sheridan is shot dead by a sniper during her Independence Day speech. Her assassin narrowly escapes the scene with his life, national security hot on his heels - or so it seems. Three months later, a wounded man is found. The young man (Stephen Dorff) cannot remember the slightest thing about his own identity. The only clue is a tattoo on his neck, "XIII". Could his lightning reflexes and killer instincts betray him?"


There are more details of the Cinebook publications of Largo Winch, Lucky Luke and XIII at the Cinebook website.
Posted by Jeremy Briggs at 7:00 am