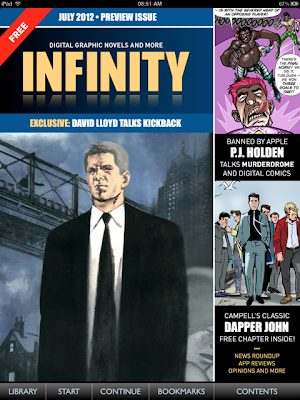 The magazine contains a roundup of digital comics news, features and reviews delivered via Apple’s Newsstand service for the iPad, including a terrific interview with comic creator PJ Holden, talking at length about Murderdrome, the digital comic he created with Al Ewing that was banned by Apple. 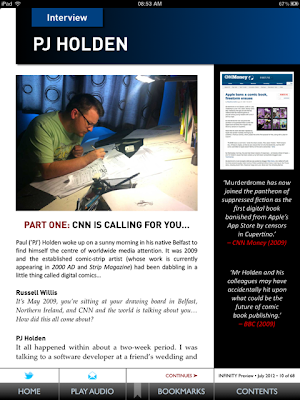 In a "Where Are They Now" style item, the magazine also profiles artist Simon Russell, the head of Brighton-based agency Boing today - but who worked with Russell on INFINITY's previous incarnation as a small press comics fanzine in the 1980s. 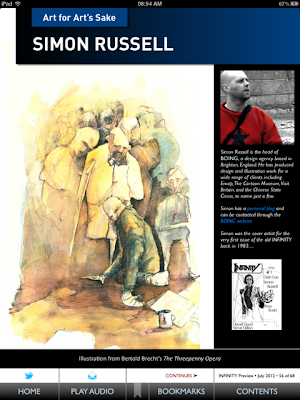 Today, INFINITY publisher Russell Willis has swapped his photocopier for an iPad and relaunched it for the digital age.

“Digital delivery is a huge part of the future of comics," says Russell, "and we’re launching INFINITY to cover things as they develop, debate the big issues such as user experience, platforms and pricing, interview the key players, and provide a guide for people to the good stuff.

"Appropriately the magazine is specially designed for the iPad, and contains audio, video and Panel Nine’s “Panel Mode” presentation of digital comics.”

The first issue proper of INFINITY will available in September as a NewsStand ready title. The magazine will initially be published bi-monthly from then on.

Users can download the preview issue (and all subsequent issues) for free from iTunes.

• Download from iTunes
http://itunes.apple.com/gb/app/infinity-digital-graphic-novels/id540599442?mt=8
Posted by John Freeman at 3:19 pm