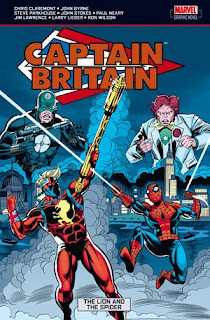 After many unforeseen and arduous delays, Panini UK's third collection of Captain Britain stories, The Lion and the Spider, is finally at the printers and should be out and in the shops in about six weeks time.

This includes Captain Britain’s epic battles against villains such as Dr Claw and the début of Slaymaster, as well as the Lion of London’s team-up with Spider-Man and the start of his quest into Otherworld with the Black Knight.

"It’s been a long hard slog with this book," Panini editor Brady Webb, who edits the UK graphic novels range as well as Astonishing Spider-Man and Marvel Legends, told downthetubes, "but hopefully the fans will think it is worth it; I know I do!"

• Click here for Captain Britain-related titles on sale on amazon.co.uk

Thank you John for obtaining this information.

I thought (when reading them initially) thathe Steve Parkhouse/John Stokes "Black Knight " stories were outstading mythic comments and its wonderful to have them available in this edition.

I don't know what difficulties Panini encountered but thanks to them for persevering and putting this collection together.