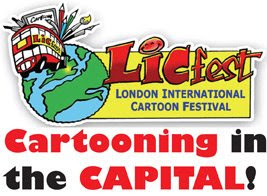 The first meeting of the London Cartoon Festival Support and Social Group (soon to be shortened to LICfest) takes place at The Cartoonist Pub in London next week.

LICfest is an online gathering of cartoonists, caricaturists, cartoon students, enthusiasts, fans, friends and relatives, all with the aim of realising the first ever London International Cartoon Festival in 2010.

"We will be outlining our plans for the Festival, sharing ideas and generally having lots of fun and chances to meet new people with an interest in cartooning or similar art forms."

In addition to the chance to meet lots of cartoonists, there will be entertainenment from singer songwriter Will Kevans, whose web site includes a link to a fun "Bag the Banker" game.

The London International Cartoon Festival (LICfest) already has a possible home at The British Library. "We just need the money, the support and the enthusiasm to make it happen!"