This is nothing to do with comics, and yet everything to do with all those who have ever worked in any creative medium. As someone who has written and edited news for over 20 years, and has been reading so many depressing stories lately about the closure of newspapers on both sides of the Atlantic, with the resultant loss of jobs, the complicated issues facing the newspaper and magazine (and indeed, comics) industry are nowhere more succinctly encapsulated in the video above marking the passing of Denver's Rocky Mountain News.

The reasons for the closure of the paper on Friday, just 55 days shy of its 150th birthday, are analyzed here by the paper's John Temple, but to sum up they're the ones you'd expect, and some you wouldn't: declining circulation, declining advertising revenues, spiralling costs, the rise of the Internet, the rise of internet Classifieds alternatives such as Craiglist... suffice to say, like other papers on both sides of the Atlantic, a toxic combination has put paid to the journalistic endeavours of a huge number of writers, to the dismay of the those loyal to the paper (and the delight of some that didn't care, in this case, for their perceived take on the RMN's politics).

What's telling is that as local newspapers are finding here, being part of a larger operation - in the case of RMN, it was owned by Scripps - would appear to have hastened the newspaper's demise. Local free papers in the UK have recently started to vanish, and paid-for local papers are also struggling, especially those owned by the likes of Gannett or Johnston Press. To these corporates, a newspaper would seem to have become little more than a line on a balance sheet rather than a vibrant part of a local community.

Incredibly, if you do indeed watch the video above, you'll note the corporate suits that make the closure announcement have the audacity to say that the paper was a model for how papers will run in future... but not, it seems, today,

The groundswell of opposition to and dismay at the closure is huge: see www.iwantmyrocky.com 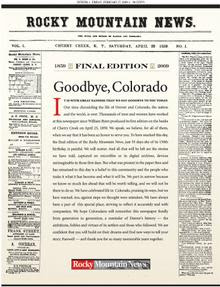 "We will scatter," notes the front page editorial of the final edition, published Friday 27 February, "And all that will be left are the stories we have told, captured on microfilm or in digital archives, devices unimaginable in those first days. But what was present in the paper then and has remained to this day is a belief in this community and the people who make it what it has become and what it will be. We part in sorrow because we know so much lies ahead that will be worth telling, and we will not be there to do so..."

I never read The Rocky Mountain News. I had never heard of The Rocky Mountain News until I read a post on a journalism group I belong to. If it hadn't been for the Internet, one of the reasons the paper began to decline, I probably would not have known the paper had even existed, let alone be cancelled by the Men in Suits, the Bean Pushers and The Corporates -- the kind of people that have brought chaos to our economy and so many lives over the past few months.

A toast then, to the men and women of The Rocky Moutain News. Long may you and the paper you created be remembered and sorely missed by the community you served, and may what has happened act as another grim warning for all those working in our mutual creative industries...
Posted by John Freeman at 9:04 pm