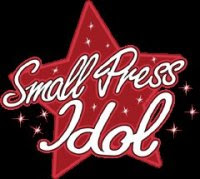 US Comics fans have launched Small Press Idol via Facebook, an event not tied to the USA if you're interested in getting involved. "It's International, this is an internet event," says organiser Ian Shires, "not tied to a physical location."

You can view the projects of Small Press Idol as they roll in via www.dimestoreproductions.com and, if you're a creator, you have until the event's end to get a project in.

If you're a simply fan of indy comics, check back on the site as often as you care to, to read the new pitches as they come in, get voted on by the judges, and turned out for your comments as well!

Contestants are currently chasing $440 cash (grows with each new contestant) and a four-issue publishing deal!

Small Press Iidol is accepting new projects till the deadline of March 20th - it is not too late to get in.
Posted by John Freeman at 10:58 pm