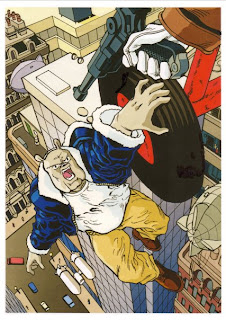 Jason Cobley has finally released his mammoth trade paperback colection, The Greatest Adventures of Captain Winston Bulldog, featuring the 'greatest hits' of his much-acclaimed indie title BAM, ranging from issue 1 all the way through to issue 28, covering something like 12 years of material.

Featuring art by Neill Cameron (The DFC), Kieran Macdonald, PJ Holden (2000AD) and many more the collection is avalable now via lulu.com.

"My main criteria for choosing the strips was to (a) not include anything where the writing made me cringe unduly, (b) try to allow the selection of strips to tell a cohesive narrative as far as possible for any new readers, (c) not include strips that demanded a thorough knowledge of complex continuity to follow, (d) leave out anything where the 'political satire' had dated unduly," says Jason, whose currently writing Frontier for The DFC.

"That leaves a range of beautiful artwork and some really good stories, so those who may have missed out on the early material, here's your chance to encounter some classics as well as later material. Like any 'greatest hits' package, somebody's favourite will be missing, and there may be something you don't think should be in a 'best of', but there it is and I'm quite pleased with it."

Jason, whose work has appeared in the Mammoth Book of New Manga, Accent UK's Zombies and adpated Frankenstein and Dracula for Classical Comics, says it was fun to revisit his small press days, even though it meant sitting at the scanner for hours on end and grappling with the pages. "I think the result is worth it," he enthuses.

• Check out the Bulldog Facebook group, Jason's blog and www.lulu.com for previews and pics. You can order it from Lulu (£7.99 plus postage).
Posted by John Freeman at 11:07 pm