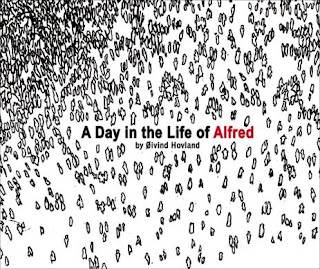 There's a sense of fun to the output of new British publisher Tabella (www.tabella.co.uk), which was was set up last year by husband and wife Kevin and Julia Quinn. By fun, I don't mean their range is humorous, although some, like award-winning Norwegian artist Olvind Hovland's superb A Day in the Life of Alfred

could probably be described as such; I mean these are books that Kevin and Julia clearly believe in and want to succeed, and they're going to get them out there no matter what conventional wisdom might say otherwise.

Based in rural Dorset, Tabella publish high quality arts and graphics books, both digital and traditional in origin. "We’re keen to expand our program, and welcome enquiries from artists/writers interested in getting their work into print," says Kevin.

He kindly sent downthetubes three of their titles: A Day in the Life of Alfred

and Trial and Error: The Aviated Efforts of Jean Babtiste de Bomberaque

, both by Hovland; and Hiyama Volume 1

The production quality on all the books is excellent and of the three, Hovland's A Day in the Life of Alfred

, a tale of alienation in the big city is my favourite. It's a stark, minimalist tome employing the style of a child's "picture book" format - illustration on the left hand page, minimal text on the right -- to trace the day of its depressed, lonely central character, infuriated that even the smallest of attempts at engaging someone he sees every day, but who he has never talked to before, are rebuffed. The sentiment must surely be one that many commuters ponder every day as they see the dame familiar faces on their journey to work, never talking unless something changes in the usual routine - the 'relative stranger' effect.

Hovland's art, sense of composition and delivery is quite astonishing, making use of a limite palette to create on the surface a simple story that stabs deep into the woes of our modern world. It's a title I'd recommend for its engaging style and masterful storytelling, while noting that this is a slim volume for its cover price, which may put off potential buyers. Their loss!

Trial and Error: The Aviated Efforts of Jean Babtiste de Bomberaque is a simpler tale, illustration rather than text-driven, revealing the determined efforts of a fictional contemporary of the Wright Brothers to successfully fly. It's a testament to Hovalnd's skill that the style of art employed is very different to that of his more recently-published Alfred: I don't know whether this displays an evolution of his style or deliberate change of look between volumes as I'm not familiar with his work, which has seen him shortlisted for, among other things, the Mercury Prize (check out more of his stunning work on his web site). All I can say is that there's a wonderful satisfaction to Bomberaque continuing efforts to become an aviator, and the quirky comedy of the closing images enhances his determination to be a success -- something many creators and inventors in many fields can surely relate to.

I'm sure that Tabella would say that the first volume of British manga title Hiyama is a little rough around the edges: Gruff79's dark and violent look at a corrupt, crime-ridden Britain, a society facing increasing gang violence and brutality is a savage "hero for our times" tale that uses manga styling to reveal a new form of justice in the form of an angry, vengeance-filled family pitted against crime lords and policemen in their employ. I have to confess to not being a manga fan and would argue that while the tale will appealI suspect, to those who are -- and it's clear from the creator's DeviantArt page that Hiyama has gathered quite a following -- the art is a tad unpolished and needs an editorial hand to realize Gruff79's clear sense of storytelling and developing ability. A second volume of the story, which will run across six volumes in all, is due to be published in June, and it will be interesting to contrast and compare.

Tabella clearly recognise some of the problems with the book but are confident of its promise. "We don't want to give too much away, but we're really excited by the Hiyama series as a whole," they say in a comment on a review of Hiyami on MyReviewer. "There are clues in the first volume as to where the series is going, but Volume 1 is in essence just the introduction. The big picture; the social and political backdrop, the characters' personalities and motivations are big issues, encompassing family, love, greed, vengeance, corruption, betrayal and violence, and the ultimate climax is dramatic indeed.

"This first volume of the Hiyama series (and Gruff79's first ever book) was pretty much completed by the time we first saw it," the publishers add. "All the pictures were drawn, with text in place, so revisions/corrections were very difficult to make (and the text was hard to check) given the timeframe we set ourselves (we really wanted to get the book in print as soon as possible). There are a few typos in there, but we don't feel they detract too much from the story. We're much more involved in the next volumes, and they will be better from that point of view.

"Gruff79 has learned a lot from doing his first book, and will definitely apply that knowledge to subsequent volumes."

All of Tabella's books are available from online stores such as Amazon.co.uk, Play.com etc., and can be ordered through bookshops such as Waterstones or your local independent book shop: their web site offers more detailed information on all the titles and links to 'try before you buy' page samples in the form of straight imagery or video previews.

This is a publisher, like Blank Slate, that's well worth watching for their eye on the quirky and the books they like, the indie work we at downtheutbes have tried to promote for several years now. I recommend checking out the web site and seeing if you like what your find.

Tabella are currently distributing the books themselves, which works for the UK and Europe, but US distribution is "in negotiation" with a US distributor at the moment, and we hope to bring you more news on developments in future.