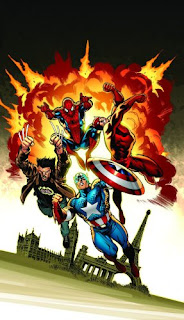 Out now from Marvel US is Marvel Europe, a collection of strips by some of Europe's top creators from native European Marvel titles such as Panini's Spectacular Spider-Man. The trade comes with a cover by Staz Johnson and James Offredi.

Pride of place in the book for British Marvel fans has to be a story featuring Brian Braddock, the original Captain Britain, back in costume in a story from Spectacular Spider-Man Adventures #114 - but can even he help Spider-Man stop a Red Skull on the rampage?

"I'm well chuffed with this," says Jon Haward, who drew the story. "The story is inked by John stokes and written by Jim Alexander another very talented Scottish writer.

"It would be nice if Marvel US published more of my Spidey stuff – I did about 32 issues in five years on Spectacular Spider-Man, featuring characters such as Sue Storm, Spidey versus Doctor Doom, Mephisto, Ghost Rider, the Black Widow, just to name a few!"

Also in the collection is Daredevil & Captain America: Dead on Arrival, drawn by Italian artist Claudio Villa with colour from Fabio D'Auria, a series of bizarre murders suggests that a long-dead villain has returned from the grave. The desperate New York Police Department turns to the Man Without Fear, Daredevil, to solve the case. Daredevil, however, is unaware that Captain America is also investigating on behalf of Nick Fury and S.H.I.E.L.D. The result is all-out action and a titanic team-up for two of Marvel's marquee heroes.

Wolverine: Saudade!, drawn by Philippe Buchet and coloured by Walter Pezzali, is a vicious, manga-styled saga of bloody revenge as only the X-Men's most popular mutant can deliver. While on holiday in Brazil, Logan has his motorcycle stolen by a group of young boys - one of whom has a secret. When a brutal gang kidnaps the boy, Wolverine sets off on a quest to find him - leading to a deadly encounter with a corrupt faith healer who may not be what he appears!

The collection also features a comprehensive atlas of Marvel Europe, from the splendour of Doctor Doom's Latveria to the wonders of the X-Men retreat, Muir Island.