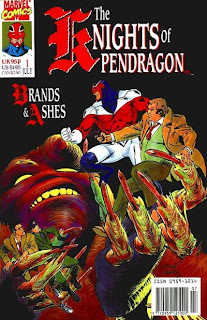 Panini UK has confirmed a collection of the first nine issues of Marvel UK's highly-acclaimed orginal Knights of Pendragon series, created by Dan Abnett, John Tomlinson and Gary Erskine, is in development, for publication later in 2009.

Knights of Pendragon, which also featured covers by artists such as Alan Davis and Simon Bisley, was initially a highly political and environmental comic, its themes drawn from the British folklore of King Arthur, environmental issues and New Age and neo-pagan subcultures.

The 216 page collection, comprising the first nine issues of the title's original 18-issue run, will feature an introduction by co-creator Dan Abnett and is currently scheduled it for an October 2009 release.

"It’s great news," Knights of Pendragon's original editor Steve White told downthetubes. "That was such a personal project for us and paved the way for so much that followed, such as Lords of Misrule [published by Dark Horse] and Hypersonic.

"I have a lot of happy memories of that time and even though I was only the editor, I felt I invested an awful lot of creativity into that.

"Looking back, it seems a bit cliched and naïve now, but we were young and reckless, and the environmental issues we now take for granted were still relatively new in the eyes of the readers. Even so, the creative team was a fine blend of talents."

The team took the environmental concerns as far as the format of the book, publishing it on Scangloss, an environmentally-friendly paper. While that may seem old hat now, back in the 1980s it was something of a first or a comics title.

"I'm absolutely delighted that the first series will see print," commented series artist Gary Erskine, whose credits include Star Wars, Dan Dare and more and describes the title as the "Best introduction to comics ever."

"I remember seeing a collected Italian or Spanish edition years ago of (containing the first six issues) and was always a little disappointed that we never followed up at Marvel UK."

"Does anyone still remember Marvel's first (and so far, only) green superhero book?" said co-writer John Tomlinson, who now wors for Eaglemoss. "I hope it's printed on eco-friendly Scangloss paper, or we're all going to Hell!

"When I think of The Knights of Pendragon now I remember Gary's unique, strange and sometimes terrifying artwork, the amazing lineup of cover artists (Alan Davis through Simon Bisley via John Bolton) and all the great letters we got," recalls. "Not only that, but I still can't go into McD*****s without being poleaxed by guilt, or at least acid reflux."

Like Steve, he's unsure how modern readers will respond to the story but remembers the book fondly. "I'm not sure how well it's aged, but K.O.P. (the first 18 issues, anyway) gave me, Dan, Steve and Gary, still pretty green ourselves, to effectively grow up in print. It's not often you get the chance to do that."

Has this been delayed, does anyone know?