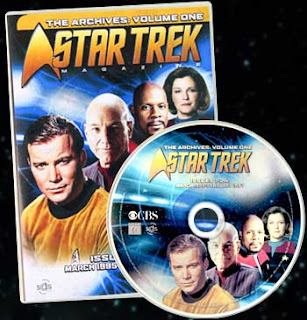 The issues, all edited by John Freeman, contain the first 24 issues of Star Trek Monthly in full colour, providing you with a fantastic search tool as well as some fascinating reading (typos and all). The only thing not included, for contractual reasons, is the reprint DC Comics strips.

Launched in 1995, back when Freeman still had hair (well, some, anyway), the Magazine helped establish Titan Magazines on the UK news stand and paved the way for other licensed tie-ins such as Star Wars Magazine, Babylon 5 and today's range, which includes LOST, Torchwood and Heroes.

The CD-ROM is compatible across Mac OSX and Windows systems and every article can be printed in full.

Features on Star Trek: First Contact and the birth of Star Trek: Voyager are just some of the highlights plus in-depth articles on Star Trek technologies, cultures and the show's history along with interviews with actors such as William Shatner, Leonard Nimoy, DeForest Kelley, James Doohan, George Takei, Nichelle Nichols and Patrick Stewart and many others.

If you've only recently discovered Star Trek Magazine and have perhaps been hunting down these early issues on eBay, this CD-ROM is a great alternative. It's just a shame it doesn't come with free bookmark like those early issues of the Magazine did!

• Click here to find out more information and order
Posted by John Freeman at 5:15 pm