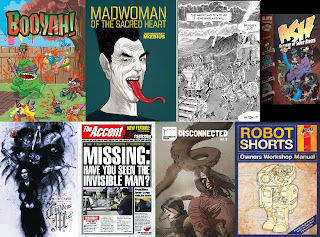 Starting a month of shows in a new time slot, Panel Borders is looking at small press and self published comics, including the titles produced by two British independent publishing companies in interviews recorded at the London Super Comics Convention.

Alex Fitch talks to Nicolas Rossert, Loran and Charles Cutting about Sloth Comics, a new publisher devoted to both British and European graphic novels, including reissues of classic titles. Loran discusses his book Booyah!, about a playful green monster with anger management issues; Cutting talks about his steampunk adventure Steam Hammer, and Rossert describes his approach to choosing graphic novel formats and the process of getting the rights to republish Moebius and Alejandro Jodorowski's classic Madwoman of the Sacred Heart.

Also, publisher Colin Mathieson discusses his company Accent UK which has built up a commendable body of work over the last dozen years concentrating on anthology books which have showcased the work of some of the country's finest small press creators. Artist Conor Boyle joins the conversation to talk about Accent's latest graphic novel Who on Earth was Thaddeus Mist? and the importance of design to the company's range of books.